Enduring every challenge 130 years could throw at it, the Feast of St. Rocco serves as an example of the power of Faith.

There’s not much left standing from the days when the St. Rocco Society was founded. The church where it all began, St. Joachim, which was the first national parish in the United States for Italians, was demolished. The tenements that housed the massive parish community met their end either in flames or by the wrecking ball of progress, and even Roosevelt Street, where the congregation would pour out, has been replaced by a ramp to the Manhattan Bridge. Aside from a handful of ancient photos and stories passed from generation to generation, the first home to one of the city’s oldest Italian feasts and processions is simply gone.

It began in 1889 in what was referred to as Manhattan’s 4th Ward — a neighborhood just a stone’s throw due east of the infamous “5 Points” and the Mulberry Bend (Little Italy/Chinatown), in what could easily be described as the slum of all slums. It was the time of the massive wave of Italian immigrants fleeing from the crushing poverty of their homeland, only to face new challenges in the dark alleys of old New York.

At that time a group of immigrants from Potenza, a province in southern Italy, arrived bearing a near life-size statue fashioned from papier-mache and plaster. The statue depicted St. Rocco and his dog, and it found its first home at St. Joachim’s. Shortly after, Fr. Vincent Jannuzzi founded the St. Rocco Mission Chapel at Catherine Slip, which was a bustling market near the water’s edge. And with that began the first procession celebrating the life of the great saint in New York. 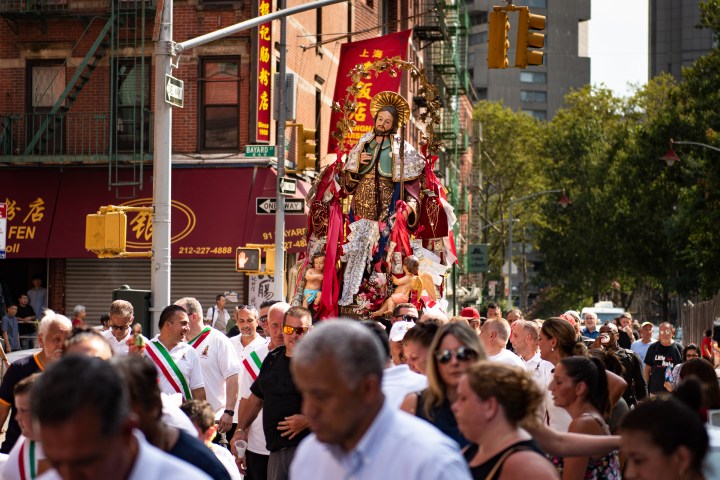 The incredible life of St. Rocco … and his dog.

St. Rocco was born to a nobleman and his wife in mid-1300s France. His mother was barren until she sought the assistance of the Blessed Mother. Upon Rocco’s birth, a birthmark shaped as a red cross on his chest was revealed.

His parents died when he was about 20, and in spite of his father’s final act making him the governor, Rocco embraced a life of asceticism and poverty. He distributed all his worldly belongings among the poor and entered the Third Order Franciscans.

He traveled extensively throughout Italy, caring for and miraculously curing many stricken by the plague, including the populations of entire villages, simply by making the Sign of the Cross on their heads.

However, he fell ill while in northern Italy in the town of Piacenza and was banished to the forest, where he erected a small hut made from branches and leaves. A spring miraculously bubbled up, supplying him with water. A hunting dog from a nearby castle would bring him bread and lick his wounds, which helped him regain his strength. Legend has it that the dog remained with him until his death years later.

St. Rocco then continued curing for a few years but finally, worn out and sickly, returned to his home town which was in the throes of war. He refused to disclose his identity, so as not to be forced back into the life he renounced. His refusal aroused suspicions of his being a spy. He was thrown in jail and remained there until his death. It is said that as he sensed his imminent passing, he asked for a priest to administer the Anointing of the Sick. When the priest arrived, the cell was radiant with a supernatural glow. The governor (who was Rocco’s uncle) was summoned and the red cross on St. Rocco’s chest was revealed.

Years later when the plague struck Rome, processions in honor of St. Rocco were held and his intercession sought and the outbreaks miraculously ceased. Stories of countless healings continue to this day.

Since 1889 the procession in lower Manhattan has been dealt every challenge imaginable: mind-  numbing poverty, two World Wars, the Great Depression, the brutal gang violence of the lower east side, the drug cartels in the 80s and 9/11. But not once did the devotees of this great saint stand down. They rose to the occasion, devoted to their Faith — a faith that endures, a tested faith that perseveres in spite of the worst the world can throw at it.

The Faith of the nation came from people such as Rocco, and it was carried with them on great ships through tempest-tossed seas from distant lands, people seeking hope on freedom’s shores. Passed from generation to generation, from father to son and mother to daughter, the grace of Faith continues to flow through the lives of these souls even to the generations to come.

The larger story surrounding this simple feast in a small enclave in New York’s lower east side is that of the Church, a Church that perseveres in spite of any challenge she faces. And the joyful voices yelling “Viva San Rocco!” at the top of their lungs on Mulberry Street are the sound of the heartbeat of that very Church alive and well, with a heart that will beat to the end of time.

St. Rocco, please pray for us.

To learn more about St. Rocco visit The St. Rocco Society of Potenza