How the Queenship of Mary is connected to her Assumption 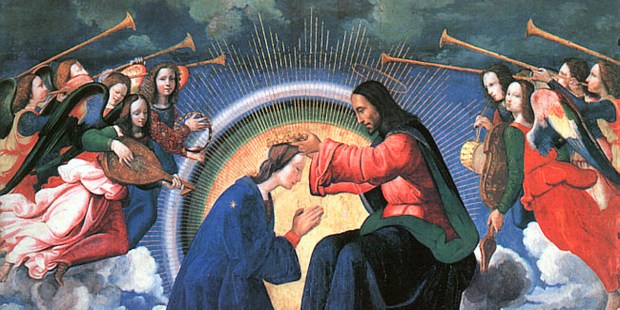 The two feasts in August complement each other and are liturgically connected.

In the Roman Catholic Church, the liturgy celebrates two principal Marian feasts in August. The first is the Solemnity of the Assumption of the Virgin Mary on August 15, and the second is the Feast of the Queenship of Mary on August 22.

While the two may not seem directly connected at first glance, a closer look will discover layers of spiritual meaning.

The feast of the Assumption has been celebrated by the Church since at least the 6th century, and for many years its celebration was extended by an octave.

In the history of the Church all major feasts were celebrated for a period of eight days. This meant that essentially the same liturgy was said, using the same liturgical texts each day of the octave.

The eighth day of the octave was seen as a final “farewell,” honoring the spiritual themes of the feast for the last time. For this reason a complimentary feast was often instituted on this eighth day.

When it came to the Assumption, it had an octave celebration for many centuries. Then on May 4, 1944, Pope Pius XII established the feast of the Immaculate Heart of Mary on August 22, the octave day of the feast of the Assumption. He did this so that by her intercession may be obtained “peace among nations, freedom for the Church, the conversion of sinners, the love of purity and the practice of virtue.”

Read more:
Why is August dedicated to the Immaculate Heart of Mary?

This is most fitting as “chronologically speaking,” Mary became the “Queen of Heaven,” after she was assumed, body and soul, into Heaven by her son, the King of Heaven.

He wrote in his encyclical Ad Caeli Reginam, about the two beliefs of the Catholic Church and how the two feasts are interconnected.

It is gratifying to recall that we … who had assembled from every part of the world, defined the dogma of the Assumption of the Blessed Virgin Mary into heaven where she is present in soul and body reigning, together with her only Son, amid the heavenly choirs of angels and Saints … in response to petitions which have come to Us from all over the world…have decided to institute the liturgical feast of the Blessed Virgin Mary, Queen. This will afford a climax, as it were, to the manifold demonstrations of Our devotion to Mary, which the Christian people have supported with such enthusiasm.

Pius XII firmly believed in the power of the Queenship of Mary and how she is a “Queen of Peace.” He added that, “We are instituting a feast so that all may recognize more clearly and venerate more devoutly the merciful and maternal sway of the Mother of God. We are convinced that this feast will help to preserve, strengthen and prolong that peace among nations which daily is almost destroyed by recurring crises. Is she not a rainbow in the clouds reaching towards God, the pledge of a covenant of peace?”

After her assumption into Heaven, Mary has become our Queen and is right there beside her Son, listening to our prayers. She is the true “Queen of Peace,” who can help us turn the tide of war through her powerful intercession.

Read more:
Why queens wear a crown, and why Mary does