This monastic complex, sitting on top of a 130-ft-tall monolith, is 11 centuries old 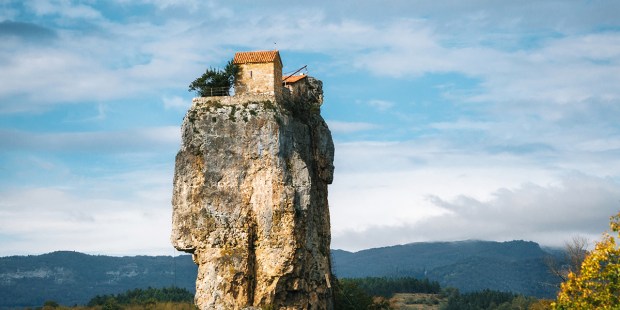 The monolith is traditionally referred to as “the Pillar of Life,” making it a symbol of the Cross.

High atop a 130-ft monolith in the western Georgian region of Imereti sits the Katskhi Pillar Complex, a small monastic community that is the stuff legends are made of.

It comprises the remnants of a church dedicated to Maximus the Confessor (also known as Maximus of Constantinople, born circa 580, once an aide to the Byzantine emperor Heraclius), a crypt, three hermit cells, a wine cellar, and a small fortification commonly called a “curtain wall.”

The pillar was abandoned for some years before mountaineer Alexander Japaridze and his team climbed it in 1944. They reported finding the remains of two older churches, thought at the time to be dating from the 5th and 6th centuries, when early Christian stylites (ascetics like Saint Simeon the elder who would live atop pillars, fasting, preaching and praying) were first active.

Later research proved the structures were built in the 9th and 10th centuries instead.

A small limestone block, discovered in 2007, contained the name of the monastery complex’s founder, Giorgi, and stories referring to the pillar as the Pillar of Life, making it symbol of the Cross.

Religious life on top of the pillar was revived in the mid-1990s, and the monastery was rebuilt between 2005 and 2007. Today, a ladder connects the complex atop the pillar with a church built at the monolith’s base, but visitors may no longer climb it, as the monastery is off-limits to tourists.