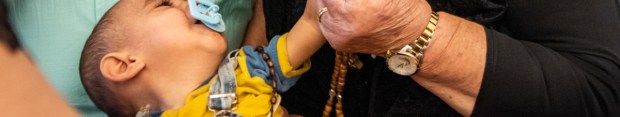 During the monthly procession of St. Charbel, a small child seemed to be healed before our photographer’s eyes

Click here to launch the slideshow
The Lebanese saint, Charbel, is known the world over as a miracle worker. He’s also revered for his role in uniting Christians and Muslims. He may well have done it again on Thursday, during a monthly procession held at his shrine in Lebanon. Aleteia’s Antoine Mekary was there to capture the procession, but saw more than he was expecting.

A child named Bassem Zakaria Moussalli, born in 2017 in Homs to a Sunni Muslim family, came with his grandmother to visit Saint Charbel. They took part in the procession from the hermitage to the monastery.

Little Baseem was born paralyzed due to a developmental problem in his brain.

When they arrived at St. Charbel’s tomb, the grandmother took a few grains of the sand to the child’s mouth.

Then during the Mass, a devotee named Aline Awad brought from her bag a piece of cotton soaked in the holy oil of St. Charbel. She touched it to Bassem’s head, hands, and legs. At the same moment, the child began to move his hands, legs, and head, and to say little words.

Of course this cannot be taken as a confirmed miracle, a designation which requires a very strict and thorough examination, on the part of both medical professionals and theologians. But as devotees of St. Charbel around the world will attest, even if there’s no official ruling of a “miracle,” what is clear is that many people believe the saint’s prayers have brought much good to their lives. 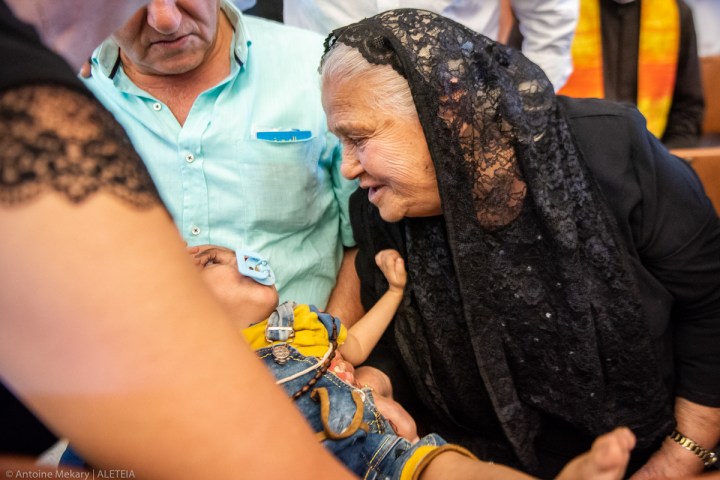 The procession happens in Annaya every month on the 22nd. That is because it was on the 22nd of January in 1993, that a mother of 12 was reportedly healed of hemiplegia caused by severe blockages in her brain. The woman, Nohad El Shami, was in tremendous pain, waiting to see if there were any medical remedies for her diagnosis.

During this time, she had a dream, in which she was walking up the stairs at the hermitage in Annaya, Mount Lebanon, where St. Charbel lived. In the dream, she attended a Mass with several monks and St. Charbel gave her Holy Communion.

Then on the night of January 22, 1993, Nohad saw in a dream two Maronite monks standing next to her bed. One of the monks put his hands on her neck and started a “surgery” on her, while the other monk relieved her from her pain by holding a pillow behind her back.

When Nohad woke from the dream, she discovered two long surgical wounds on each side of her neck. But she realized she could move her arms and walk on her legs as normal. Nohad believed she was completely healed.

The next night, Nohad saw St. Charbel again in her dream and he said to her, “I did the surgery to let people see and return to their faith. I ask you to visit my hermitage in Annaya on the 22nd of every month and attend Mass regularly for the rest of your life.” The second Maronite monk that was present in the operation of Nohad was St. Maroun.

Since St. Charbel appeared to Nohad in her dream on the January 22, 1993, hundreds and thousands of people from Lebanon and all over the world gather on the 22nd of each month to pray and celebrate Mass in Annaya.

Again, these reported healings through the intercession of St. Charbel have not been officially recognized or approved as miracles. But many people attest that the saint is a powerful channel of grace.