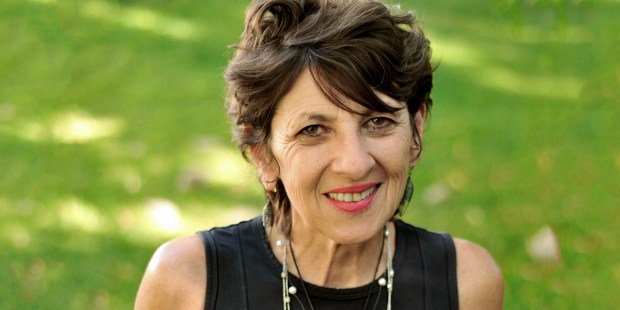 Heather King opens her new book Ravished with a blunt admission: “I’m an ex-gutter drunk who graduated from law school in a blackout, sobered up, quit my job as a Beverly Hills litigation attorney, converted to Catholicism, and in the mid-1990s embarked on the precarious life of a creative writer. My history includes promiscuity, abortions, adultery, a 14-year marriage that ended in divorce, and a life-long tendency toward romantic obsession.”

The Catholic author certainly establishes her “credentials” from the get-go, and we learn right away that she can speak from experience and not simply theoretically.

“Part of the reason I put that up front is, that’s my story,” she said in an interview this past week. “My story is the story of the Prodigal Daughter, of coming to the Church as a sinner. … And really to say, ‘And now, I don’t have to live that way anymore.’”

She says she hopes the reader doesn’t come away thinking the book is all about her. “It’s always about how Christ chose the likes of me,” she said. “If he could choose me, he could choose anybody. If I could find my way, anybody can find their way. And this is what I found.”

Here are excerpts from King’s interview with Aleteia:

How would you describe your new book?

It’s a book geared specifically toward womanhood—how I’ve been formed as a human being and a woman in the Church. To me, it’s really a love letter to the Church, in this culture where, culturally, as women, we’re supposed to be “angry” and feel incessantly put upon and depressed and discriminated against. And I simply don’t feel that. … I think in large part it’s because when you are doing what you feel you were put on earth to do and you’re giving it 110% and you’re grounded in Christ, you don’t feel oppressed and discriminated against. You feel that you’re living fully.

At times while I was reading it, I thought about G.K. Chesterton, who supposedly wrote in response to a British newspaper’s question, “What’s wrong with the world?” Chesterton’s answer consisted of just two words, “I am.”

To me, Ravished is a book about how the Church gives us the freedom that we purport to long for. Part of that, absolutely, is taking responsibility for ourselves, seeing that what’s wrong with the world is always what’s wrong with me, and so not devoting my energy to thinking ‘Oh, if only they would change, if only men would change, things would be easier for me.’ Things have been the same since time began. I don’t really care if men will change; it’s how can I change, and that means how can I change the inner orientation of my heart, what and who I’m obedient to, how I order my day, increased responsibility for myself. And that’s where the freedom lies.

This quote from Chesterton [is] really the heart of the [difference between the] secular world as opposed to the world of the Catholic. It’s a totally different point of view… It’s a secular world that kind of sees what’s wrong with the world but blames it on everyone else, and thinks that if everyone would shape up, the world would be a better place. You tend to get these kind of liberal, knee-jerk policies, civil rights to the point where it’s now become simply absurd, where every person on earth needs a separate bathroom and that kind of thing. Whereas the Catholic starts with, “Yes, there’s something really wrong with the world … but it’s me.” … But there is a solution, and it is Christ, and it’s obedience, and it’s on your knees. It’s not about “Where are my rights,” and “I’m gonna stand up for my rights.” It’s “How can I serve?”

Your love for the Church certainly comes through. You stick with her in spite of some serious shortcomings. Why?

Well, that to me is an absolute no-brainer. Where else would I go? Maybe it’s because I’m a convert. I would not be dissuaded from Christ and His Church by any of the stuff that’s gone on. Yeah, the Church is human. The Church is made up of very human people. So yeah, the “scandals” don’t, you know, the sorrow of all sin and loneliness and using each other as objects and all that, of course, is always a source of deep concern, but again, if I’m really concerned about that, how can I conduct my own life? How can I purify my own heart? How can I offer up my own body, really, as I talk about in the book—which we’re all called to do, as followers of Christ—my own capacity, my erotic, procreation, all of that … That is what goes way more toward helping someone I’m never going to meet avoid temptation than getting online and virtue-signalling how appalled I am by the bad behavior of everyone else.

There’s a scene in the book where this comes alive for you. You had gone to confession and Mass, and on your way home you run into a little kid on a skateboard and you’re taken by his beauty and innocence. And you feel that whatever suffering you’re going through can somehow be offered up as a prayer for that kid.

That was one specific moment where I remember feeling to my bowels how our efforts at purity of every level, for one thing, connect us and put us in a deeper solidarity with every other human being. And whose heart doesn’t just turn over at the sight of a 10-year-old kid, a beautiful young boy on a skateboard just trying so hard to … grow and flourish. And it was just given to me through a deep stab of feeling. …

To go to confession, to go to Saturday vigil Mass, it goes back to Christ. … It’s like to be in that kind of solidarity with all the obedience and the sort of surrender and the fidelity that that entails really is the best thing we can do to save the world. …

There have been a few things written lately suggesting that America is experiencing an epidemic of loneliness. Rod Dreher on his blog recently posted a letter from a man who says he’s worked hard all his life and been faithful to his marriage, and now all of a sudden his wife wants to leave. And the sad thing is, he can’t find in his church either a deep spirituality or a sense of community, perhaps when he needs it most. You’ve seen a number of places where the Church is doing the right thing for people like this. What has worked, in your experience?

I would say most churches are like that, you feel that. But again, part of the absolute mystery of the Mass is that it’s veiled, even under the best of circumstances, the glory and the weirdness and the mystery: the fact that we are eating Christ’s body and drinking his blood, that it’s the greatest act that’s ever occurred in the cosmos—the crucifixion and resurrection. And yet, it’s veiled kind of by necessity, because we’re incarnate and imperfect and we can’t replicate the true majesty. You have to bring your imagination and your heart to Mass to understand. And even if you’re not feeling it, … you’re not really there to get something; I think you have to go with the idea of giving something. I mean, Christ has already given the gift. So if I can go with an attitude of “How can I bring my entire being and my heart to the altar?” That’s what brings the Mass alive.

But what that requires is an entire life ordered down to its smallest moment. I think it starts with “Do I believe that Christ is who he said he was, and if so, it’s my responsibility to hone my curiosity, to purify my heart, to make every day an adventure, to fill my life with reading and walks and observing nature and conversation and interactions with people. … If I do that, I can hopefully become a person who is suffering like this guy, and that guy in a way is all of us, right? …

So I just make myself into the kind of person … that guy could come to, feel comfortable speaking to. How do we treat each other at the Sign of Peace? I think often the Sign of Peace is a wonderful barometer of the spiritual health of any church. You know, you turn to your neighbor for the Sign of Peace and they’re repulsed by the sight of you—never mind that they don’t want to take your hand. That to me is like “You should go to confession.” What are we here for, if not to welcome one another? …

I consider myself very lucky because I really came to the Church through having gotten and stayed sober. And then a fellowship of recovering alcoholics, who really in a lot of ways worked out the gospels way more deeply, and … in a weird way are living out the gospels in a way that are a lot deeper and richer than many people who consider themselves sort of perfect Catholics. We admit our brokenness right off the bat, and then with a sense of humor and with real sort of honesty and vulnerability and real desire to do better, we share with each other. … and then sort of offer a solution, sort of one day at a time: this is how I’m dealing with it, this is how I die to self. … Without that kind of ongoing conversation, I think it’s very hard to keep the thing going. We have to witness to it, we have to share, we have to ponder and puzzle things out. But again, if you hunger enough for that and look hard enough for it, you will find it. Christ said “Seek and you shall find. Knock and the door will be opened to you.”

A lot of times, being shattered in every way—not that God wants that to happen, but it happens in the course of things—and I think often that is the entree to the door that gets open, if one really seeks Christ, because all human stuff has really failed us. …

In the culture’s eyes, I’m just increasingly just a piece of waste—67 years old, a woman, aging, solo, childless. The culture has no use for me. But in the Church, as a member of the mystical body, I have value at the table, and I have every bit a legitimate a place and as full a place as a mother of 10, as a 23-year-old woman, as a gay man who is 35 and who is faithfully following the teachings of the Church, and he too has absolutely the full place at the table as I do, because all of us are laying down our lives—literally, our body, for our friends. Because we know that that fidelity to the teachings of the Church go toward healing the whole world, toward fostering new life into the whole world.