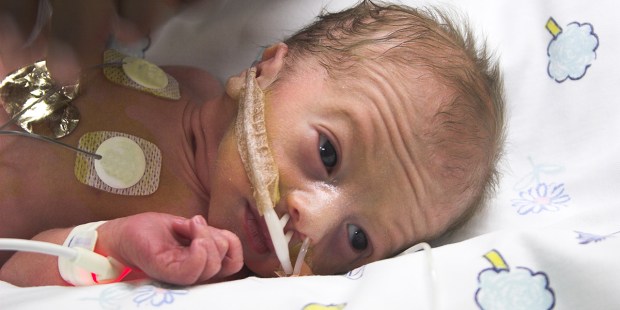 The power of music never ceases to amaze us!

Over the years scientists have found many positive aspects to listening to music: from lifting our spirits to increasing our brain performance. It therefore seems only natural that if music is such a powerful friend to us, then it might also be a very useful tool in helping to build the brains in premature babies.

A study in Switzerland showed that roughly 800 babies are born before 32 weeks of pregnancy each year, leaving these tiny premature babies with a greater chance of risk of developing neuropsychological disorders. Being so young at birth, these delicate newborns are both under-developed and have increased stress factors that come through being treated in specialized neonatal units.

Through their research, however, scientists were able to determine that music could help ease the emotional stress and therefore boost brain performance, as long as it was a very specific type of music. Researchers from the University of Geneva and the University Hospitals of Geneva decided to look into having music composed especially for these little preemies. And the results are impressive.

In findings published in the United States in the Proceedings of the National Academy of Sciences, it was found that “medical imaging reveals that the neural networks of premature infants who have listened to this music, and in particular a network involved in many sensory and cognitive functions, are developing much better,” as reported in the Good News Network.

As Professor Petra Hüppi, who directed the work, explains, premature babies are born with immature brains that continue growing out of the comfort of the womb. The sounds and senses the babies pick up in the special units they’re staying in can be detrimental to healthy brain development. This can then lead to learning or emotional disorders as the baby develops.

So in order to counteract the stressful stimuli the babies experience outside of the womb the researchers looked to music. With composer Andreas Vollenweider, who’d already worked with “fragile populations,” involved in the project, the scientists and musician were able to come up with appropriate music for appropriate times of the day.

To determine the instruments, Vollenweider, along with a nurse who is trained in developmental support care, played different instruments to the babies to gauge their responses. Interestingly the instrument that had the most instant calming effect was the punji, or the Indian snake charmer’s flute. This led the composer to write 8-minute pieces using the punji, with the additional use of the harp and bells.

The study concluded that babies who’d been exposed to the specialized music had stronger neural networks, and therefore better brain development, then children who had not listened to the music. With the first babies from the experiment now reaching six years of age, scientists will be able to carry out a cognitive and socio-emotional assessment to see if these benefits can continue to be seen as the child develops.

Read more:
3 Healing effects of music on your body