This order takes care of the abandoned elderly: Meet their foundress, St. Teresa of Jesus Jornet 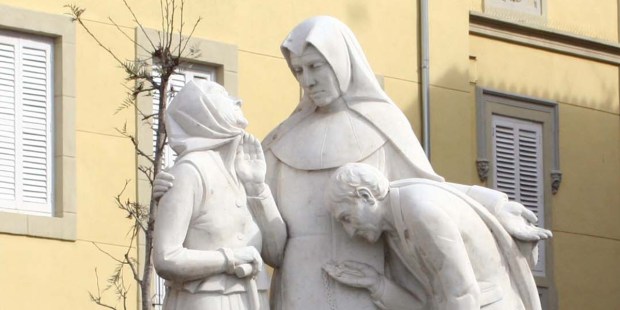 Like the better known Little Sisters of the Poor, these sisters are dedicated to those who are reaching the end of their earthly pilgrimage

Teresa Jornet Ibars was born into a family of farmers on January 9, 1843, in Lleida, Spain. She was baptized the day after her birth and received her Confirmation in 1849.

As a child, Teresa displayed a deep concern for the conditions of the poor, and she often would bring someone to the home of her Aunt Rosa for something to eat, medical aid, or other necessities. Aunt Rosa always did her best to help those Teresa brought to her, and her example reinforced Teresa’s natural desire to help the poverty-stricken. After some time, Teresa moved to a different area of Llieida to live with another aunt, and while there she began studying to be a teacher.

When Teresa was 19, she began teaching in Barcelona. She also felt a strong calling to the monastic life. In 1868, she sought admission to the Poor Clares but anti-clerical laws of the day prevented that from happening. In 1870, she did become a Secular Carmelite.

Toward the end of that same year, her father died, and she herself came down with tuberculosis, keeping her homebound for around six months.

Her spiritual director encouraged her to mourn her father and physically get back on her feet by caring for the many elderly people in the area. Most of these people were living alone and suffering from severe poverty. She immediately accepted the challenge.

In 1872, Teresa Jornet Ibars opened her fist house in Barbastro, located in north-central Spain. Along with some followers and her sister Maria, the group took the habit and became a religious congregation. Teresa, who was already a  Lay Carmelite, took the name of one of the great Carmelites, St. Teresa of Avila. Her name became Teresa of Jesus Jornet. The official founding of the new order was January 27, 1873. They called themselves The Little Sisters of the Abandoned Elderly  (not to be confused with The Little Sisters of the Poor founded by St. Jeanne Jugan with the same mission to care for the poor elderly some 30 years earlier, in 1839).

Teresa of Jesus Jornet was unanimously elected the first Mother Superior of the new community. Their new ministry was totally dedicated to the care and well being of the aged. Mother Teresa of Jesus taught her Sisters to sacrifice whatever they had to help the men and women in their care. She explained that these people were God’s gifts to them and that they were serving Him as they cared for them.

Mother Teresa of Jesus was noted for the powerful sense of peace she always exuded. This inner peace drew many young women to join her.

The motherhouse opened in Valencia on May 8, 1873. Mother Teresa was confirmed as the superior in 1875.

Read more:
The nun who left France to create special homes for the elderly poor in the U.S.

On December 8, 1877, Mother made her perpetual profession and was named Superior General for the entire order, and continued to give her life serving her Sisters, and the elderly, for nearly two decades.

When the General Chapter of the Order opened in Valencia on April 23, 1896, Mother Superior begged her Sisters to not re-elect her. But they did. They could not imagine anyone else as their leader.

In 1897 an outbreak of cholera hit Spain. Mother Teresa of Jesus joined her Sisters to help care for the victims of this dread disease. By the time it was over, 24 Sisters and 70 patients had died from the disease. Mother Teresa was exhausted and ill and was taken to the order’s house in Liria. She stayed there and met her spiritual guide, Father Saturnino, for the last time. The date was July 15, 1897.

Mother Teresa of Jesus Jornet died on August 26, 1897, and that day is her feast day. She was 56 years old. When she died her congregation had 50 houses.

Today there are some 2,600 religious serving the elderly in 210 facilities in different parts of the world, including such places as Puerto Rico in the Caribbean and Mozambique in Africa. The motto of their spirituality is “God in the heart, eternity on the mind, and our feet on the ground.”

St. Teresa of Jesus Jornet, please pray for us, and for the lonely elderly of our world.

Read more:
The crucial lesson we can learn from an elderly woman who was eating alone