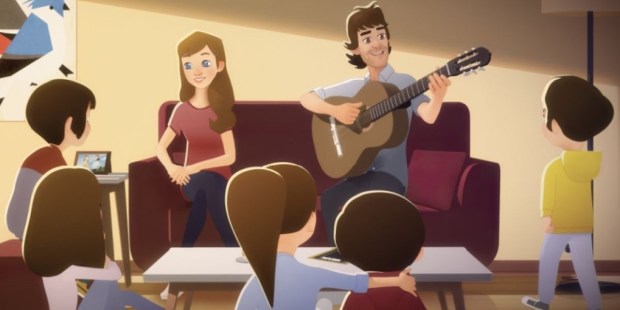 They weren’t sure they could manage it, but now say they have the family they always wanted.

Matias Cifuentes and his wife Mariana are a couple from Argentina who’ve taken a marvelous step of love. During the first 15 years of their marriage, their one pregnancy ended in a miscarriage. Then, their lives took an unexpected turn.

After looking into fertility treatments, they decided to start investigating the possibility of adoption instead. They took the courses and workshops required by local law, and signed up to adopt two children up to 5 years of age.

After waiting for several years, they got a message about three siblings who were available for adoption. However, when Matias and Mariana went to the Child Welfare office, they were told that those three had found home, but there was a surprise: there were actually five kids—three boys and two girls ages 7 to 14 —  who were up for adoption and didn’t want to be separated.

Matias explains that they didn’t decide immediately to adopt them; it was a process they had to work through together. “At first, I got cold feet when they told us there were five of them. Mariana was calmer and more reflective, but I was against it.”

Although Matias wasn’t on board with the idea at first, he couldn’t sleep at night thinking about the story of those loving siblings who wanted to stay together. That was what moved the Matias and his wife to take the step of getting to know the kids in person.

They signed the pre-adoption papers to begin the process of bonding with the children. After meeting with them a few times, the siblings arrived at the Cifuentes’ home. Mariana tells how the kids clearly need a sense of belonging after spending time in orphanages and foster homes. “That day, we gave them a welcoming party with all the family that was awaiting them, and then began our life together, which wasn’t easy at all.”

The children arrived with few material things, but burdened with frustration and anxiety. “They only therapy we did was with the Child Welfare psychologist, and following up on how things were going through reports to the court. At first it was total chaos, but the crazy thing was that after living together for two months, we felt that things were coming together well.”

Matias says that they bonded quickly with the younger boys. “When we opened the door, they called me ‘daddy.’ It was more of a process with the older ones, until one day they let slip, ‘Because dad …’ or ‘Because Mom …’ referring to me or to Mariana. At that moment, we pretended we didn’t notice, but we shed a tear or two.”

The couple say that the important thing was to get started. “If they tell you about it beforehand, you say, ‘No. I won’t be able to do it. It’s going to be impossible.’ Nevertheless, when you start to get down to business, you find the strength somehow, you figure out a way, you learn to cook, how to talk, and you look at the resources you already have so you can adapt and overcome each situation.”

Among the challenges, the material side of things was significant. Matias is a teacher and a musician, and Mariana is an interior designer who works with an office of architects. Where they formerly had a recording studio, they set up the three boys with mattresses on the floor to begin with, and they put the two girls in another room.

Then, thanks to the generosity of others, they received a donation of bunk beds for the boys. “Friends and family members have been helping us. The ones who have children gave us clothes and toys. People are willing to help. The kids are learning how to appreciate things and that some things have to be earned.”

“We had to start teaching them house rules and hygiene, and sit down to talk with each of them, since in orphanages they didn’t get much individual attention. Regarding authority, we taught them that we are going to run things a bit because we’re Mom and Dad, but that it’s a team effort.”

For Matias and Mariana, what helps them keep going is the love they receive. “The children are full of affection, and that recharges our batteries. Sometimes when I’m distracted, they hug me and say, ‘I love you.’ Or when we’re driving in the van the youngest will touch me on the back and say to us, ‘Daddy, Mommy, I love you.’ It’s amazing.”

Today, the couple says that they’re very happy, and they want to share a message: “Often, you have an idea about how things ought to be, but life surprises with with something different, and the truth is that today, this is the family we’ve always wanted.”

Read more:
Beginning to find my motherhood through adoption