How Stalin’s daughter became a Catholic 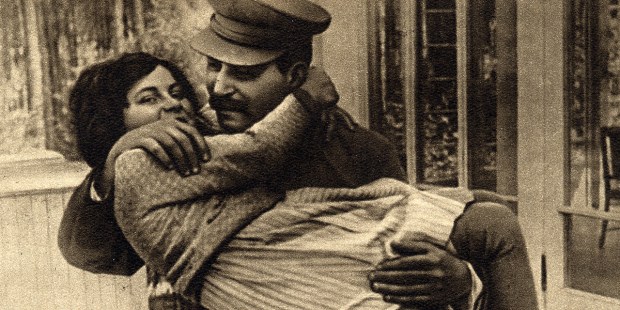 The spiritual journey of Svetlana Alliluyeva.

The importance of grandparents in one’s life cannot be underestimated. It can be clearly seen in the life of Svetlana Alliluyeva.

From childhood, she was Svetlana Stalina, the only daughter of Soviet dictator Josef Stalin. Later, she took her mother’s name, and later still, while living in the United States and upon marrying an American, she became Lana Peters.

Born in 1926, she grew up in an atmosphere where God was never mentioned. Her father ruled over a Communist Party and government that did its best to minimize religion’s role in people’s lives—or use it to advance communist ideology.

In the long run, however, that temporal power was not stronger than the example of Stalin’s Georgian mother—Svetlana’s paternal grandmother.

“The first 36 years that I have lived in the atheist state of Russia have not been a life without God at all. However, we had been educated by atheistic parents, by a secularized school, by our entire deeply materialistic society. There was no talk of God,” Alliluyeva wrote in her autobiography Twenty Letters to a Friend. “My paternal grandmother, Ekaterina Djugashvili, was an almost illiterate peasant, precociously widowed, but who nurtured trust in God and the Church. Very pious and hardworking, she dreamed of making her surviving son—my father—a priest.”

That dream never materialized, of course.

Svetlana’s mother’s mother, Olga Allilouieva, also played a role, she wrote. She “spoke to us gladly of God: from her we have heard for the first time words like soul and God,” she testified. “For her, God and the soul were the very foundations of life.

“I thank God that he has allowed my dear grandmothers to transmit the seeds of faith to us; although they were outwardly obsequious with the new order of things, they kept their faith in God and Christ deeply in their hearts,” she concluded.

Those seeds were nurtured by life experience and watered by tears. Alliluyeva remembered when, for the first time in her life, she prayed to God for healing. It was on behalf of her 18-year-old son, who was very sick. “I didn’t know any prayer, not even Our Father,” she wrote. “He listened to me, I knew it. After healing, an intense feeling of God’s presence invaded me.”

In time, she met a priest, Fr. Nicolás Goloubtzov, who, she wrote, secretly baptized adults who had lived without faith. “I needed to be instructed on the fundamental dogmas of Christianity,” she said. She was baptized in the Russian Orthodox Church on May 20, 1962.

Five years later, after defecting from the Soviet Union and living in Switzerland, she encountered Roman Catholics for the first time. Moving to the United States, she encountered an overwhelming diversity of religious traditions.

“I needed to discover what was right in the multiplicity of confessions and lost track of what I was personally and what I believed in. I looked at Orthodoxy for the solution of my personal search,” she said. “The answers to my questions seemed too abstract. Despite the friendship I had with Orthodox intellectuals, … my spiritual thirst remained unsatisfied.”

One day she received a letter from a Catholic priest in Pennsylvania, a Father Garbolino, who invited her to make a pilgrimage to Fatima, on the occasion of the 50th anniversary of the apparitions there. She wasn’t able to go, but she kept up a nearly-20-year correspondence with Fr. Garbolino. In 1976 she befriended a Catholic couple in California, and lived with them for two years. “His discreet piety and his request to me and my daughter deeply moved me,” she wrote.

In 1982, she and her daughter moved to Cambridge, England. “My contacts with Catholics were always natural, calm and encouraging,” she recalled. “Reading notable books such as Raissa Maritain [the Russian-born wife of Jacques Maritain and convert to Catholicism] helped me to get closer and closer to the Catholic Church.”

She ended up entering the Catholic Church and became a daily Mass-goer. “Before, I felt unwilling to forgive and repent, and I was never able to love my enemies,” she wrote. “But I feel very different from before, since I attend Mass every day. The Eucharist has been made alive and necessary for me. The sacrament of reconciliation with God to whom we offend, abandon and betray every day, the sense of guilt and sadness that then invades us: all this makes it necessary to receive it frequently.”