Why is September dedicated to Our Lady of Sorrows? 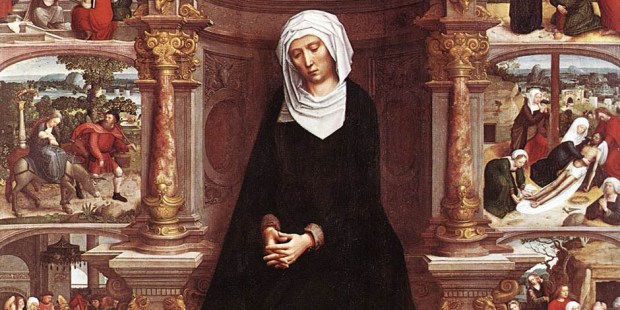 The tradition dates back as far as the 17th century, when the Servites established a special feast in September.

Over the centuries there grew a custom of devoting certain months of the year to specific spiritual themes. September became known as the month of “Our Lady of Sorrows.”

Initially this might seem like a strange designation, as Our Lady of Sorrows is usually connected to Jesus’ crucifixion, which in the Church’s liturgical year is celebrated in March or April.

This brought into September a particular meditation on the cross of Jesus Christ, and by the 17th century there developed a complementary Marian feast on September 15.

In the 17th century the Servites celebrated a solemn feast of the Seven Sorrows of Our Lady, which in 1817 was extended to the whole Church by Pius VII as a memorial of his sufferings in exile and captivity and of his deliverance through the Blessed Virgin’s intercession.

Furthermore, “Pope St Pius X transferred this feast from the third Sunday of September to this octave-day of Our Lady’s Nativity (September 8th), in 1912.”

Originally this feast was more concerned with Mary’s sufferings throughout her early life, excluding the Passion of Jesus, her Son, but over time it has come to represent all of Mary’s suffering.

On account of these two central feasts September has become known as a month dedicated to Our Lady of Sorrows.

Read more:
A short guide to praying the Chaplet of the Seven Sorrows of Mary

Read more:
A powerful novena in honor of the Sorrowful Mother