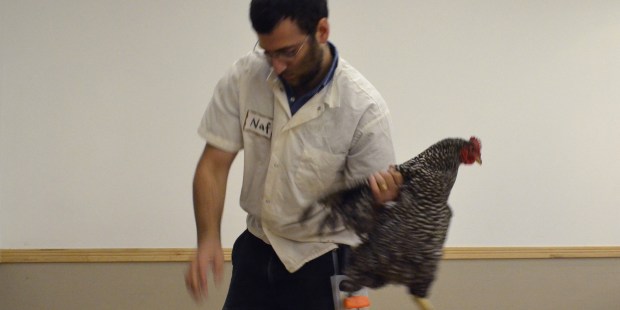 The Jewish community of Belgium has filed a lawsuit against the ban which conflicts with both Jewish and Muslim dietary practices.

This Sunday, a ban on the ritual slaughter of livestock went into effect in the Wallonia region of Belgium. The bill, passed by the Wallonia Parliament, will require that animals be electrically stunned before slaughtered, a method which is not acceptable under either Jewish or Muslim dietary practices.

The passage of the bill drew criticism from leaders of the Jewish faith, both local and international. Rabbi Pinchas Goldschmidt, president of the Conference of European Rabbis told the Jerusalem Post:

“While we have succeeded in curbing legislative attempts on the matter in many European countries, in the European Parliament and in other EU institutions, we are at war, and we call on the international community to mobilize.” He added, “This is another sad day for Europe’s darkening skies.”

A similar law is already in place in the Flanders region of Belgium, as well as in Sweden, Denmark, Switzerland, and Norway. Although the law is phrased as a measure to protect animal welfare, critics have noted that the support of the bill by “far-right” organizations suggests the move was driven by anti-Muslim sentiment.

The law would require all slaughtered animals to be electrically stunned before slaughter. The bill includes a clause that permits reversible stunning, which isolates the electric shock in the brain of the animal, briefly knocking it unconscious. The other form of electrical stunning is designed to stop the animal’s heart, and is not reversible.

While some Muslim communities allow for reversible stunning, the process of preparing Kosher meat expressly prohibits any stunning of livestock.

Chief Rabbi of Brussels, Albert Guigui, was adamant that the bill encroaches on the Jewish people’s religious freedom. He said:

“We feel cautiously optimistic, since Luxembourg judges in the past decided against violation of religious freedom and human rights. We will continue to fight resolutely against this decision until it is annulled.”

The Coordinating Committee of Jewish Organizations in Belgium (CCOJB) has already filed a lawsuit against the ban. The Jerusalem Post reports, Their cause is supported by The Lawfare Project, a legal think tank and litigation fund that files legal cases against anti-Jewish discrimination around the world. They stated:

“[We] maintain that while the ban was implemented with the stated purpose of animal welfare, that argument is flawed because animal welfare has always been central to the laws of kosher practice.”