Euthanasia isn’t about being free; it’s about being reduced to a dollar sign, says Pope Francis 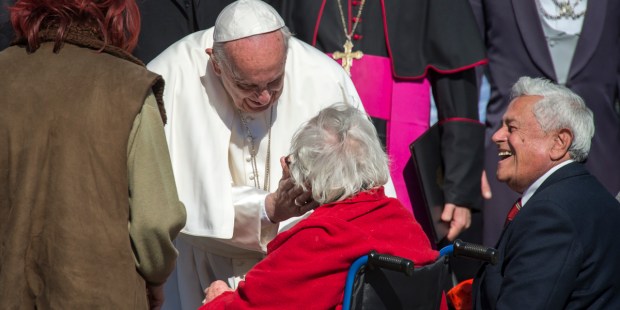 “What rejection of hope is involved in the decision to give up everything and break all ties!”

Pope Francis praised the Italian Association of Medical Oncology for their work to get the various disciplines involved in health care to work together, in a world “often hampered by the jealous safeguarding of knowledge.”

In the same address this week, he spoke of euthanasia, saying that it’s not really about freedom, but rather reducing persons to things.

The practice of euthanasia, which has already become legal in several states, only seemingly aims to encourage personal freedom; in reality it is based on a utilitarian view of the person, who becomes useless or can be equated to a cost, if from the medical point of view he or she has no hope of improvement or can no longer avoid pain.

Technology, the pope said, is not at the service of humanity if because of it, humans are seen as things, when technology “distinguishes between those who still deserve to be treated and those who do not, since they are considered only a burden, and sometimes even a waste.”

Instead, Francis called for a culture that is attentive to the value of persons, committed to such things as

— accompanying patients and their loved ones at every stage,

— seeking to alleviate their suffering through palliative care,

— offering a family environment in hospices, which are increasingly numerous.

He urged the oncology association to “never lose heart” in the face of “the insistent proposal of more radical and hurried roads.”

If one chooses death, in a sense problems are solved; but how much bitterness there is behind this reasoning, and what rejection of hope is involved in the decision to give up everything and break all ties! Sometimes, we are in a sort of Pandora’s box: all things are known, everything is explained, everything is resolved but only one thing is hidden: hope. And we have to go and look for this. How to translate hope, or indeed, how to give it in the most extreme cases.

The pope went on to stress how much of the work of oncologists is tied to other areas, ultimately to respect for the body and its needs.

“Indeed,” he said, “the best and truest prevention [of cancer] is that of a healthy environment and a lifestyle that respects the human body and its laws.”

He lamented a lifestyle in certain cities that “subject the body to constant stress due to the rhythms of life and exposure to pollutants.”

This draws our attention back to the care of the natural environment, our common home which we must respect, so that it may also respect us. The protection of the environment and the fight against tumors then become two sides of the same problem, two complementary aspects of the same battle of civilization and humanity.

Read more:
Doctor on trial in Netherlands for euthanasia of woman who resisted attempt to kill her

The pope also encouraged the health care professionals to “always to keep in mind the example of Jesus, Who was the greatest teacher of humanity, to inspire your gestures and make Him your own traveling companion.”

He voiced a prayer that Jesus would inspire the sick and help them “to find the strength not to interrupt the bonds of love, to offer suffering for their brothers, to maintain their friendship with God.”

May He inspire doctors – He who in a certain way said He was your colleague, as a doctor sent by the Father to heal humanity – always to seek the good of others, to spend themselves generously, to fight for a more supportive world.

May He inspire all to be close to those who suffer. Closeness, that very important and much needed attitude. The Lord also implemented it, closeness, in our midst. May He inspire everyone to be close to those who suffer, to the little ones above all, and to put the weak in first place, so that they can may nurture a more human society and relationships characterized by gratuitousness, rather than opportunity.