Lust: This deadly sin is not just about sex 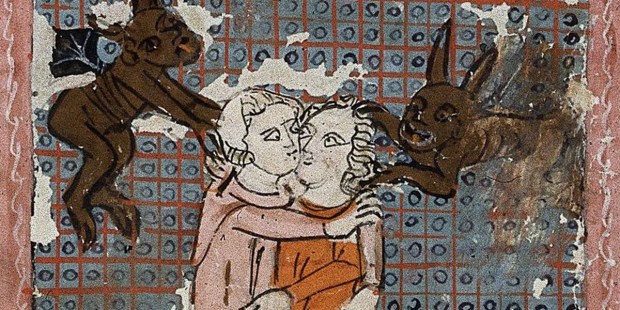 Looking at this deadly sin as more than sexual helps us understand what goes wrong within us.

Remember this, Father! Novelty is the lust of the theologian!

So said an unidentified old man to a newly ordained priest after Mass; the elderly gentleman melted into the crowd, and was not seen or heard by the priest again. What was the old man getting at?

Lust is listed as one of the seven deadly sins. We’ve been taking a fresh look at the seven deadly sins (read about sloth HERE; gluttony HERE; anger HERE). So, we have to talk about lust, but why this story about the enigmatic old man? Isn’t lust the body escaping from all rational control of the soul? Isn’t lust just a physical thing? And how can lust have anything to do with novelty or theology?

Aristotle does identify the person characterized by vice as “vicious,” one who is ruled primarily by passions. (Passions are not purely physical, but that’s another story for another time.) A subset of the vicious person Aristotle calls “crafty.” A vicious person may want to get drunk; a crafty person wants to get you drunk. If we understand lust as a form of incessant craving, and the most dangerous kind of lust as conniving, we can see that lust is not just a bodily dynamic at all; moreover, we can understand better that old man’s warning from all those years ago.

Let’s put it this way:

Countless saints and scholars have warned against letting the baser appetites get the better of us. Rightly so, but their case is understated. The proverb, “The corruption of the best is the worst” is a useful way of understanding the disorder of the soul that can succumb to the lust that the old man in our story warned us about. Our baser passions, left unchecked, can draw us down into behavior beneath our human dignity and harmful to our health. What if what is highest in us is left unguided, allowed to be goaded by cravings for novelty and self-seeking that one ordinarily associates with simpler, baser cravings?

In sexual sin, the human person allows his desire to become affixed to what nature and God have not allowed for. Sexual lust is the tantrum of a selfish person, enraged because the moral law says, “Don’t cross these lines—or else!” What if we understood lust as also a tantrum of the soul in response to lines drawn by Sacred Revelation? For example: “This is how God has defined marriage”; “This is the purpose of sex”; “This is how God is to be worshiped.”

In that case, “novelty is the lust of the theologian” (as described above) becomes easier to understand: Novelty is a disordered desire, allowed to become imperious by a person who should know better, for God to be other than who he says he is, the author of life, the standard of good and evil, our creator and our judge. Such a person is not satisfied (satis facere—to make full), not made full, with Sacred Revelation. As a promiscuous person wants sex on his own terms, so too the soul given over to the lust of novelty wants God on his own terms.

Surely, this is nothing new. Second-guessing God began in the Garden of Eden: “Did God really say …?” (Genesis 3:1) The undisciplined soul, refusing to learn to be satisfied with the revelation of God, yields to an infinite craving. (This shouldn’t surprise us. We’re made for the infinite; if we’re not filled with an infinite good, we will be left with an infinite emptiness.) The soul illustrates the formula: LUST = MIND OVER MATTER. That is, lust refuses limits. The undisciplined soul, refusing to be satisfied with God, begins to echo the serpent: “You will not die; for God knows that when you eat of it your eyes will be opened, and you will be like God, knowing good and evil.” (Genesis 3:4-5)

The undisciplined soul can become drunk on the (apparent, but fleeting) power of rewriting revelation, redefining God—looking for ever-new ways of deciding for ourselves what is true, good, beautiful, holy, divine, diabolical. But any addict will tell you that it’s never enough. You always crash after the high; the thrill fades and recedes very quickly. Greater and greater doses are needed, yet they achieve less and less each time. Eventually, one stops—or one dies.

God is the author of Sacred Revelation. We are either fed and nourished by it, or we yield to the demands of cravings that can never come to rest. Let’s work and pray together that we will yield to the truth, rather than strive to be its master.

When I write next, I’ll continue our series of reflections on a renewed look at the seven deadly sins. Until then, let’s keep each other in prayer.