Pope says he played with a homemade soccer ball as a kid: Leather balls were expensive 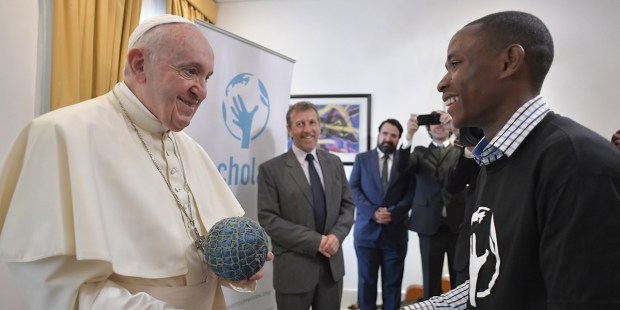 Work and joy are part of sports, he says

Pope Francis is visiting Eastern Africa, in Mozambique and headed later this week to Madagascar and Mauritius.

On his first morning in Mozambique’s capital, Maputo, he met with leaders of an education initiative he has sponsored to expand children’s opportunities through solidarity, called Scholas Occurentes.

Vatican News reported that in his off-the-cuff remarks, he spoke about his own childhood in Argentina.

He noted how young people often play on Mozambique’s beautiful beaches with a soccer ball made from strips of cloth, and recalled how he did the same thing growing up.

“When I was a child I played with a ball made of cloth strips,” he said, “because at that time soccer balls were made of leather and were very expensive.”

He said that such homemade balls became “a cultural symbol of that time, so much so that a popular Argentine poet even wrote a poem” about them.

Francis’ love for soccer is well known, and he often remarks about the values that can be acquired through sports.

“With this symbol, you gather the entire story of amateur sport – and the work that goes into it – as well as joy for the game,” he said.