Known primarily for his portraits of society figures, the American painter devoted part of his career to depicting religious themes with an unusual technique.

Born in Florence, Italy, in 1856 to an American expat family, John Singer Sargent is considered  the leading portrait painter of his generation for the way he could capture figures in society across Europe and the United States. But not many art lovers know that part of his career was devoted to religious subjects. One of his most notable religious themed works is “Crucifix” (1914), a moving watercolor painting depicting a roofed cross, typical of the Tyrol region in north-east Italy.

Here, Christ is depicted from a low vantage point that highlights the parallel between his gaunt figure and the gnarled tree on which the crucifix rests. Much as the tree holds the power of renewal, the figure of Christ seems to already hold the potential for resurrection. 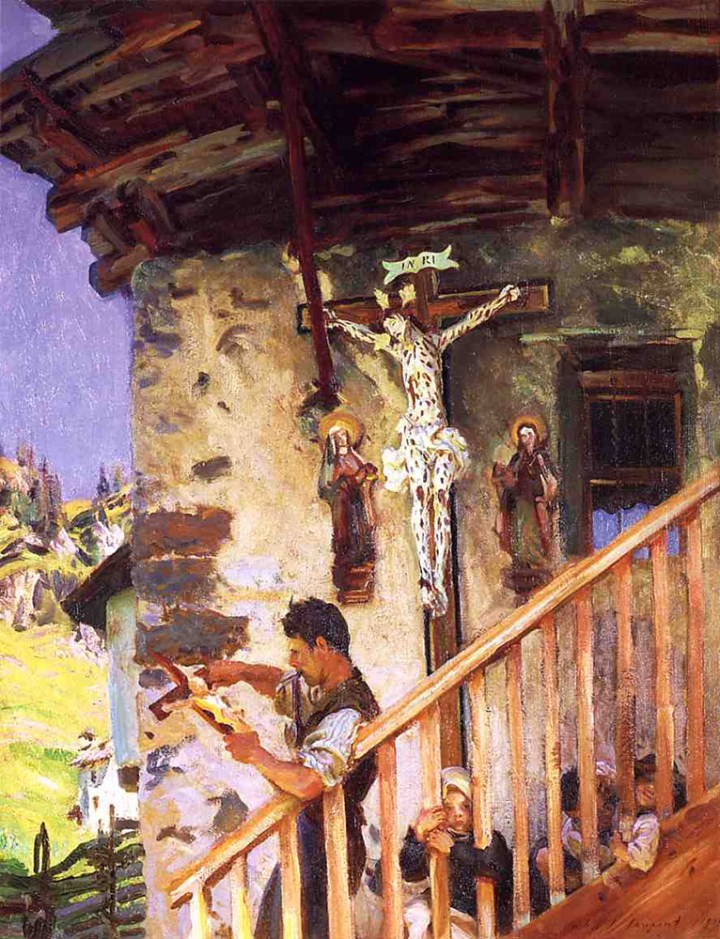 But the more famous religiously themed project completed by the American artist is a series of murals commissioned by U.S. architect Charles McKim for the Boston Public Library. Sargent completed a series titled “The Triumph of Religion,” featuring major religions from all world civilizations. Sargent draw from each religion’s art forms, from ancient Egyptian reliefs to Byzantine mosaics and New Testament frescoes.

In 2004, the murals were restored by a team of the Harvard University’s Straus Center for Conservation and are now available for everyone to see thanks to a digital library

Christian images are grouped in the southern end of the gallery’s east wall. For Catholics, the most relevant subjects are probably the Trinity, the Pieta and the Madonna with the Child.

In the panel titled “Dogma of the Redemption: Trinity and Crucifix, Frieze of Angels,” Sargent painted the crowned figures representing the Holy Trinity wearing a single red robe bearing the Latin word “Sanctus” (Holy). Right below them the American painter features Christ on the cross with Adam on his left and Eve on the right. At the bottom of the half-moon complex is the Frieze of Angels, represented by figures wearing primary tones that hold symbols of the Passion of Christ, including nails, hammer and the crown of thorns.

In the Pieta, a raised relief made of wood, metal, papier-mache and glass, the Madonna is featured with Christ at her feet bearing visible wounds incurred during the crucifixion.

In “Handmaid of the Lord,” Sargent depicts the Madonna with Christ Child with his hand in benediction and two angels guarding over them holding scrolls that read “Vessel of the Spirit,”  “Chosen Vessel,” “Closed Garden,” “Tower of David,” and “Tower of Ivory” — titles of the Virgin Mary from the Litany of Loreto.

When Sargent completed his assignment in 1919, he was criticized for lack of innovation at a time when most of his contemporaries were leaving traditional representation for more avant-garde techniques such as Cubism. But as these works show, Sargent was able to create a pastiche in which artistic styles that are usually considered incompatible, like wood bas relief and glass mosaic, come together. For those interested in seeing his work in real life, “Triumph of Religion” still adorns the third floor of the McKim Building of the Boston Public Library.