The Ukraine: A baby factory where “defective” products like Bridget are abandoned 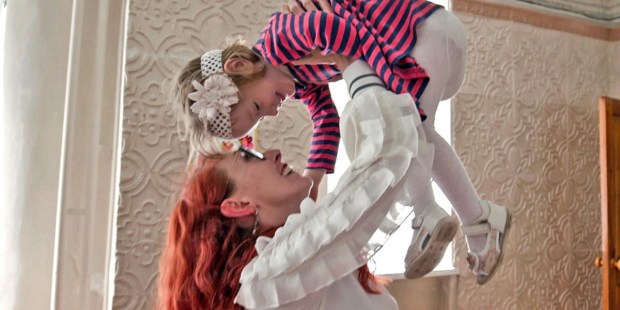 The business of surrogate motherhood moves to the Ukraine.

Our current globalized economy includes the outsourcing of production to places where the burden of bureaucracy and the cost of labor are lighter, right?

The business sector involved in providing babies for third parties has experienced the same trend. Surrogacy is an enormous business, and up until now, the most common destinations for this industry were in Asia.

That lasted until there were scandals that closed the door to foreigners who had been sending money to agencies in exchange for babies. Do you remember little Gammy? He was the fruit of a surrogate pregnancy who was abandoned and left in the care of the Thai woman who had given birth to him at the same time as a baby girl (who was born healthy).

It was also thanks to that scandal that arose after baby Gammy was abandoned by the Australian couple that Thailand tightened up its laws regarding access to surrogacy — above all for foreigners– starting in the end of July 2015.

Investigative reporting by an ABC News journalist: From Little Gammy to Bridget

The person who discovered this dramatic story and made it public was a tenacious reporter named Samantha Hawley, author of the report titled Damaged Babies and Broken Hearts: Ukraine’s commercial surrogacy industry, which publicized the case in question and followed the tracks of other babies who were commissioned and then not accepted, some of whom have never been tracked down.

Now that the big southeast Asian locations are so inhospitable to the industry, the new infernal surrogacy paradise is the Ukraine. Requests for surrogate motherhood have increased by 1000% in the past three years, according to a report on Italian news website TPI.

Hawley, a reporter for ABC News Australia, indefatigably investigated the phenomenon, also tracking it in its Indo-European version, and concentrated primarily on the case of a pregnancy of twin babies commissioned by an American couple, which ended with the death of the male baby and the abandoning of the female because of brain damage resulting from premature birth. The reporter had an informant in Kiev. She describes it in detail here. Let’s take a look at the story as summarized in Italian news outlet Avvenire:

“These are the key points of the chronicle, reported by Hawley in a touching television report more than 20 minutes long and in a long article you can read on the web: Matthew S. E. T., 39 years old, and his older wife Irmgard P., 61 years old, signed a contract for a surrogate mother in the Ukraine. In February 2016, the surrogate mother, who lives in a war zone, in Donetsk, brings into the world two twins at the 25th week of pregnancy. One of them dies. The other is Bridget, who weighs only 1.75 lbs. The doctors discover brain damage. The American couple is disillusioned, because they expected a perfect baby, certainly not a defective product … And so, they reject Bridget, return to California, and five months later, with a formal letter, they request the doctors ‘unplug’ their daughter overseas, since her medical condition seems irreversible.”

In the developed West, when people discover they have an intense desire to be parents which they are unable to satisfy on their own, and when they have enough money in the bank, they turn to Kiev and other cities full of clinics for surrogate motherhood, generally carried to term—or not, as in the case of the poor mother of the twins who were born prematurely—by young women suffering from poverty, sometimes extreme poverty.

They are rich in fertility; they have a womb they can put on the market. Is this not also a form of wealth?

There is a high demand, so a supply is set to meet it.  But if a product for which someone has paid isn’t delivered according to the expectations included in the contract, what can a poor dissatisfied client to do, besides leaving a terrible review? Return the product—or as in this case, upon discovering that it is of such poor quality, you don’t even pick it up from the provider.

That’s what happened to Bridget. Her surrogate mother, in the midst of her pregnancy, was forcibly displaced from a war zone, Donetsk, and since she was pregnant with twins, she experienced complications that led to a tragically premature birth.

In this cynical “Amazonization” of human pregnancy, the presence of products that fall short of the clients’ desires is statistically predictable and perhaps even acceptable. The clients can simply leave a bad review, and that’s it. But we are human beings, and those children are the stumbling block that Providence leaves in our path to make us fall face-down on the ground and wake up to our wretchedness.

Children discarded by false builders will become the cornerstone

This baby, sought for an entire year by Samantha Hawley, still has the desire to live and to receive whatever love is offered her, however it may come. She isn’t pleasing to her American parents, as we know, and consequently they have permitted themselves to ask that the baby’s life be cut short by interrupting her life support.

She has the American couple’s last name, but she isn’t a Ukrainian citizen, so she lives without belonging to anyone. Still, she smiles, and she strives to learn. She lives in a facility in the city of Zaporizhia, an industrial center southeast of Kiev, along with with approximately 200 other children. Here, she’s known as Brizzi.

A nurse entered her life, a woman with red hair who raises up the child’s face to the level of her own. She loves her, and she takes care of her, but she cannot become her adopted mother. It’s sad that she wasn’t welcomed immediately into a true family, able to love her and to stimulate her adequately, because she has such potential, says the nurse, between a smile and a sadness that chokes her up. Avvenire reports:

“Bridget is alive, and she’s growing. Today, she’s three and a half years old, and she has disabilities, she has intellectual and motor developmental delays, but with her sweetness she dazzles the Australian reporter who managed to track her down and meet her. The nurse who has followed Bridget’s progress since she was born, Marina Boyko, plays with her, hugs her, and assures the journalist that the little blond girl is able to understand what is said to her, and will probably be able to walk. Certainly, if she had had a loving family at her side instead of an orphanage and a handful of nurses, as affectionate as they may be, things could have gone differently.”

I went to look at the courageous journalist’s Facebook page. There’s a post dated August 23 expressing gratitude for donations that have arrived to help Bridget receive her treatment, and offers of adoption:

A huge thank you to everyone who has donated, big and small. What a huge difference it will make and we have had so many…

In the inhuman market of the baby business and of the exploitation of women, there’s a tragic and logical consequence: the defective products don’t make it to the client’s house. But it’s these very children, who are so fragile, who shout out to the world that we are still human and that our main duty is to love the little ones, those who are “only” persons, even if they are not yet—or never will be—centers of production and consumption.

These are also collateral effects, and decidedly more desirable.