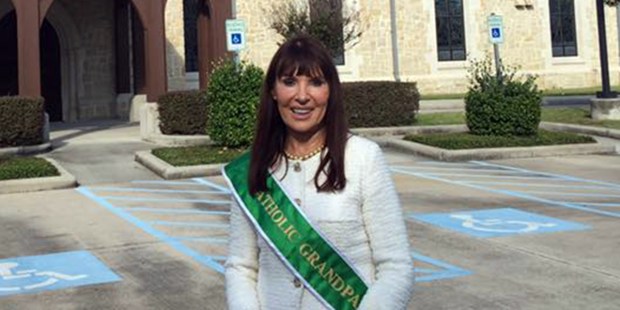 Conceived at Walsingham and born at Knock, the Catholic Grandparents Association is praying that families can be reunited in heaven, and on earth too.

Catherine Wiley was visiting the shrine of Our Lady of Walsingham in England on Our Lady’s birthday in 2002. As she prayed before a statue of Our Lady, she wondered how she could bring some birthday joy as a gift to the Mother of Our Lord.

She thought of St. Anne and St. Joachim, parents of our Blessed Mother and grandparents of Jesus, and the idea of honoring Our Lady’s parents by supporting grandparents in their role of spiritually guiding their children came to mind.

As a grandmother herself, she knew many grandparents today suffer over their grandchildren being raised without the faith, or without proper catechesis. Many feel helpless and don’t know what to do to try to guide their grandchildren to the beauty of our faith and the Sacraments.

Familiar with pilgrimages to the shrine at Walsingham, Catherine proposed the idea of a pilgrimage especially for grandparents, to be held on September 8, Our Lady’s birthday. That first pilgrimage for grandparents in 2003 was a beautiful start to what is now an international ministry, with a Mass for all the grandchildren represented by their grandparents that day.

An annual Grandparents Pilgrimage is now held at Our Lady of Knock, Ireland. Before long, grandparents were telling Wiley that they felt they needed something more than just an annual day of prayer. She was receiving calls from heartbroken grandparents who knew how crucial faith in God is, and wanted it so much for their grandchildren. They wanted support, encouragement, guidance with interceding for their grandchildren and help in leading them to heaven. So in 2009 Cathy decided to form an association.

She likes to say the Catholic Grandparents Association was “conceived in Walsingham, and born in Knock!”

The Mission and Ministry of the Catholic Grandparents Association (CGA) is to “pass on our faith and keep prayer at the heart of family life.”

She says that these grandparents are passionate about their most important vocation, with a desire to leave their grandchildren a legacy of the gift of faith, which they received from their own parents and grandparents.

This year, the Knock pilgrimage will again be held on September 8, Our Lady’s birthday. The pilgrimage consists of a special Mass said for all the grandchildren represented by the grandparents there, and recitation of the Grandparents Prayer. Bishop Kevin Doran of Elphin, with Archbishop Jude Thaddeus Okolo, Apostolic Nuncio to Ireland, will celebrate the Mass. Many come by bus from all over Ireland, Scotland, and Wales.

“Grandparents often feel that they are failing,” Wiley commented. “They gain great peace and comfort knowing that they are not alone in their anxieties for the future for their grandchildren. They are reassured to learn that we are practical as well as spiritual, sharing ideas and resources to help them with everyday anxieties and issues.”

Wiley wrote to Pope Benedict asking if he would write a special prayer for grandparents. The Grandparents Prayer below is the result.

Joining in now from around the world are branches of the Catholic Grandparents Association. There are several in the UK and in Ireland, Australia, and now about 30 in the U.S.

The first one Catherine started herself at a parish in Florida, where she and her family vacation each year.

Read more:
A prayer to Sts. Joachim and Anne for your wayward grandchildren

Marilyn Henry was looking for something to be involved with in her new parish in Texas. She’d recently been in a London church where she’d picked up a CGA brochure titled, “Did you know that Jesus had grandparents?” With 11 grandchildren and fond memories of learning prayers at her grandmother’s knee, she saw the need for such a ministry. She approached her pastor about starting a parish CGA ministry. Now it’s growing in her parish.

“I think a wonderful tribute to our ministry at my parish, Prince of Peace, Houston, is that we were asked to be a team for the Children’s Liturgy of the Word — a perfect fit — and the children love when it’s the grandparents turn. We have an ‘Adopt A Prayer Child’ program where we add children’s names to our prayer book and pray for them at each meeting. Especially touching was when a young mom asked us to include her children since they have no grandparents to pray for them. This year we also added a monthly Children’s Rosary on Sunday afternoon and Children’s Stations of the Cross during Lent. Both are open to all the children of the parish and have been well received and appreciated,” Henry said.

“One set of grandparents struggled to even see their grandchildren. Faith was not discussed in their home. Through sharing and prayer with others in the Ministry, the grandparents found strength to persist and eventually, all three of their grandsons celebrated their First Holy Communion on the same day,” she added.

One set of grandparents there has several adult children who are not sharing the faith with their children. They continue to pray every day for every member of their family, including themselves. Yet now a grandson has entered the seminary to become a Catholic priest.

One Missouri couple saw their grandchildren’s faith experience end at First Communion. But then a non-practicing adult grandson starting asking questions, mostly to refute Catholicism. With prayers for guidance in these conversations, the grandparents responded gently and lovingly. Eventually, their grandson began to read about and study the Catholic faith and attend Mass. At 28, he made his Confirmation.

On fire for the faith, he now engages his own parents, who had been away from the Church for more than 50 years. His parents now attend church with him. He is the faith leader of his family. The grandparents look at their grandson as the shepherd Christ has sent to bring their adult children back to the faith.

A granddaughter shared her gratitude for her grandparents’ prayers and guidance. “I chose my Memaw for my sponsor. I wanted her with me on my faith journey because she was my biggest inspiration. Memaw is a Catholic woman that leads by example and says it meant the world that I chose to become Catholic. We both learned a lot together, sharing a deeper love and understanding of one another and Catholicism. Right now I am working while finishing my degree in Information Technology. I live with my Memaw and Papaw and we share family dinners every night and the 5 p.m. Mass every Saturday.”

Read more:
30 Years ago she wanted an abortion; now she’s a grandmother

While some of the chapters simply gather the members to pray for their grandchildren, others invite a speaker on a topic of interest to grandparents. Members worldwide can view a monthly newsletter on the website. All meetings begin with the Grandparents Prayer and any updates on the grandchildren represented.

In New Paltz, New York, Katherine Mironchik shares how important CGA has been at her parish of St. Joseph over the past four years.

“We raised our children in the faith, but sadly many of them are not practicing, which means that their children are not being given the same opportunity for faith formation that we had given them. This is where we must come into the picture. If we don’t pass on our faith to our grandchildren, where will it be, in the future and for generations to come? …

“One pastor told me a boy came to confession to him and said his sin was not going to Mass. His parents did not go to church. Father told him it was not his sin. Guess who brought him to confession. His grandmother.”

Other ideas for the ministry include celebrations of Bambinelli Sunday (Gaudete Sunday), and an annual Grandparents Picnic. One branch has a new program called “Welcome, Little One,” where faith-based packets are distributed to parents for children from birth/baptism to age 3, at 6-month intervals. The last packet encourages parents to enroll their little ones in the Religious Education program.

The New Paltz ministry is co-coordinated by Donna Dietz, a grandmother of 20, with several great-grandchildren. Every Wednesday, she has a family dinner for 35 with grace before meals. Though the ministry is still hoping to see more children and grandchildren return to the Church, they recognize that for now they are a source of security, comfort, structure and love to their families.

Catherine Wiley remains an active part of CGA in Ireland. “I consider that one of the most important achievements of the CGA since its inception has been to create awareness in the Church itself, of the untold treasures parishes have in grandparents. Grandparents are the same the world over. They simply want the best for their grandchildren, for them to be good, decent human beings, to develop a moral compass and to know that there is a loving God waiting for them with open arms whenever they go astray along the way.”

Read more:
Pope Francis warns: A society that does not take care of its grandparents has no future

Jesus, you were born of the Virgin Mary, the daughter of Saints Joachim and Anne.

Look with love on grandparents the throughout the world.

Protect them! They are a source of enrichment for families, for the Church and for all of society.

Support them! As they grow older, may they continue to be, for their families, strong pillars of Gospel faith, guardians of noble domestic ideals and living treasuries of sound religious traditions.

Make them teachers of wisdom and courage, so that they may pass on to future generations the fruits of their mature human and spiritual experience.

Lord Jesus, help families and society to value the presence and roles of grandparents. May they never be ignored or excluded, but always encounter respect and love.

Help them to live serenely and to feel welcomed in all the years of life that you give them.

Mary, Mother of all the living, keep grandparents constantly in your care, accompany them on their earthly pilgrimage and, by your prayers, grant that all families may one day be reunited in our heavenly homeland, where you await all humanity for the great embrace of life without end. Amen!