Every day residents of lower Manhattan traipse past the 10-foot brick wall that surrounds the perimeter of Old St. Patrick’s Cathedral, sipping their lattes and making their way down Mott Street. Street vendors use the wall’s surface to hang their artwork and wares for passers-by to view, never knowing the incredible history it holds deep within its mortar.

But while its story may be long forgotten, its legacy remains.

The wall stands as a long forgotten monument to a man and a time in New York’s history, when Catholics and the Irish were brutally persecuted and their churches burned. Each brick is a testament to the unbreakable resistance and unyielding Faith of the men and women who stood shoulder to shoulder against the torch-carrying mobs and hate-filled headlines that lusted for the annihilation of the Church in America.

In the early 1830s, against a backdrop of increasing immigration from Ireland, an intensification of religious intolerance and nationalism began to flare up. Hate filled and racist rhetoric about the Catholic Church and the arriving Irish “Papists” rose to a fever pitch, and violent skirmishes began to break out throughout the city. 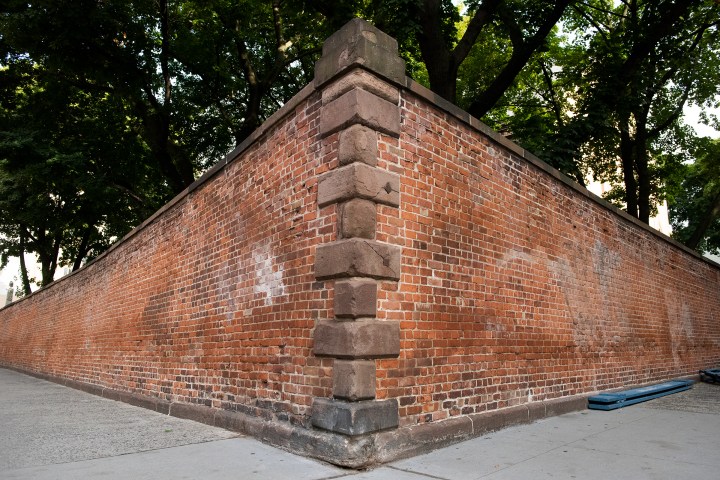 Sensing the impending storm and in the wake of arsonists burning St. Mary’s Church on Sheriff Street, Bishop John Hughes leapt into action. “Dagger John” — a name attributed to him for his fierce personality and the manner in which he drew a Cross before his signature — was not one to be trifled with, and he would take the fight directly to those who challenged his flock.

In 1834, the wall was constructed around Old St. Patrick’s and armed guards were placed within its courtyard. But it wasn’t until 1844 that things would come to a head.

After nativist mobs torched churches, bringing about multiple deaths in Philadelphia, they turned their sights on New York. They prepared for a torch-lit assault of Old St. Pat’s, but “Dagger John” organized between 1,000 and 2,000 Irish men to defend each church in the city, placing sharpshooters on the walls of Old St. Pat’s.

He then took his cause public, declaring with an unblinking eye to the newly elected mayor, James Harper, known for his anti-immigrant position, “If a single Catholic Church were burned in New York, the city would come to a second Moscow” (referring to the 1812 Fire of Moscow where the residents all but destroyed their city, as Napoleon’s troops entered).

When city officials asked him to restrain his brigades, he replied, “I have not the power. You must take care that they are not provoked.”

Some of them were so determined to make every resistance, that they would have set fire to their own houses and destroyed the city, if any mob had ventured to attack them. They felt as if they were surrounded by enemies. The very officials that should protect them were in league against them; so they were resolved to protect themselves and their Churches, and to stand by their bishop to the death. [Most Reverend John Hughes, the first archbishop of New York – Henry Brann 1912]

Faced with this unyielding show of resolve, the attackers retreated, seeing that those defending their right to religious liberty and ancestry were willing to sacrifice everything — not out of hate, but out of love — love for their Faith and love for Liberty.

And it was from this pivotal moment in the history of New York that the tide began to change, marking a path forward for future generations to worship freely.

This wall that stands quietly in the shadows of the towers and skyscrapers that surround it carries the spirit of those whose strong hands placed each brick upon brick to raise it from the ground … and of a people resolved to courageously stand together to defend their Faith.

Old St. Patrick’s still rises proudly within its protective embrace, remaining a beacon of hope just as it was when its cornerstone was set … just as the Catholic Church has been for more than 2,000 years.

“And so I say to you, you are Peter, and upon this rock I will build my church, and the gates of the netherworld shall not prevail against it.” Matthew 17:18