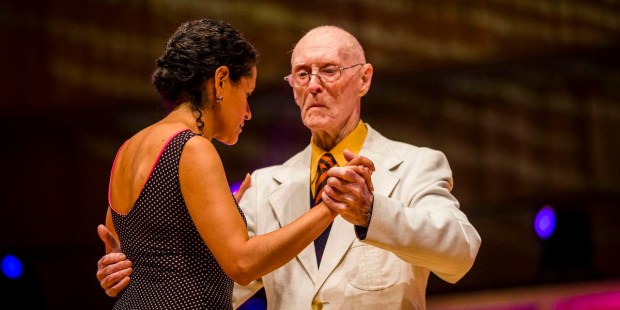 John McManus will make you re-think what it means to be “too old” to learn something new.

John McManus’ life is worthy of a feature film, although an unconventional one. It would start off something like the movie Saving Private Ryan, showing how he fought in World War II; but it would end something like the TV series So You Think You Can Dance, with the 99-year-old veteran competing in a tango competition in Buenos Aires, the capital of the country that gave birth to the popular and passionate style of ballroom dancing.

McManus and his dancing partner, professional dancer Lucía Seva, performed with elegance and dignity during the qualifying stages of the World Tango Championship before a packed Luna Park stadium, receiving an enthusiastic response from the audience. They were representing Waterford Tango in Ireland, the organization to which McManus belongs. It was the first time McManus had flown on an airplane since 1981, and he bought the ticket with help from friends.

Falling in love with tango

Born in Scotland, but Irish by “adoption,” he fought with the Royal Army in France during the Second World War, and then he worked as a telegraph and radio operator in the merchant marine. When, at the age of 80, he saw a couple dancing the tango, he knew right away he wanted to learn. “They were on stage and they performed this most wonderful dance, and I thought, ‘That is fantastic, I’ve got to do that,’” he told the Associated Press, according to an article by Almudena Calatrava in the Washington Post.

He started taking classes, sometimes as often as five times a week, and now also dances for fun on weekends. His personal discipline—the heritage of his army days?—has made him a good student, according to his teachers.

This is the path that led him to the dance floor with Lucía Seva last month, where they performed before the jury among other couples vying to pass to the next level of the competition. “I knew I had no chance of winning, but I thought it would be a good experience,” McManus told the the AP, and he gave it his all.

Despite not moving on to the finals, McManus stood out as the oldest dancer ever to participate in the competition, and he received a plaque for his participation.

Thank you Dorota Pii Su Laa for this great picture!

McManus says that tango has changed his life.

“Before, maybe I didn’t bother too much going out,” he said, as reported in the WaPo article. “Now someone says there is a dance in so and so hotel, and I’ll say: ‘Yes I’ll be ready in a minute.’ Now I’ve got hundreds of friends, thousands.” He also told the reporter that he appreciates the benefits for his mental and physical health, as the dance “keeps me fit, moving all my muscles and my legs and my body, and my brain, because you have to navigate the floor.” Plus, he says, the “beautiful music and the rhythm of the dance” make him feel good.

“Too old” for something? Maybe we should think again.

The next time you feel too old to do something, remember the example of this 99-year-old war veteran who took up dancing the tango at the age of 80 and competed in Argentina shortly before completing a century of life. We aren’t all gifted with the physical health to be dancers in our golden years, but we can stay open to life’s invitation to try new things and to live our life to the fullest as long as God grants us strength.

Read more:
Watch how this 96-year-old woman is helping to end loneliness among the elderly (VIDEO)