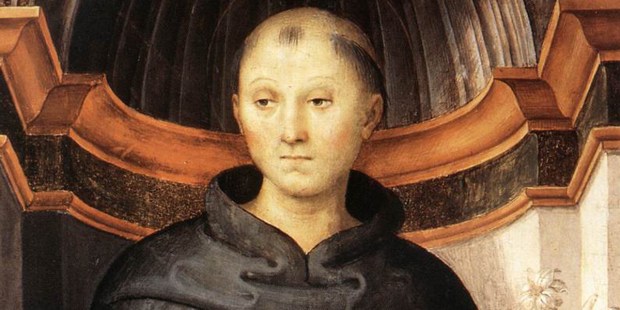 Leo XIII gave Nicholas of Torentino this patronage in 1884.

The Guruttis were poor farmers who lived in Sant’ Pontano, Macerata, Italy. Childless, they traveled to the shrine of St. Nicholas of Myra, the saint who inspired the modern-day Santa Claus. They prayed to St. Nicholas to asked God if He might bless them with a child who would grow up to serve God. Their prayers were answered, and sometime during the year 1245 they had a son. They named him Nicholas.

Even as a child, Nicholas displayed a pronounced spirituality. He imitated hermits and would hide in nearby caves to pray. As Nicholas grew, he realized God was, indeed, calling him to service. One day he was listening to an Augustinian priest who was preaching. Nicholas knew immediately that he wanted to join that order of priests. He became a monk at the age of 18.

While he was still studying for the priesthood, he would use any spare time he could find to give food to the poor. His superiors trusted him with feeding the poor, and he would go to the monastery gate and distribute food from the monastery’s provisions. He would give everything he could to the people waiting, and the procurator had to slow him down lest the friars had nothing to eat.

One day he was providing food to a very sick boy. He instinctively laid his hands on the boy’s head and said, “The good God will heal you.” The boy was instantly cured; naturally word of this spread quickly through the local area.

A few years later, after he was ordained a priest, another incident helped his fame to spread. An elderly woman who was blind was brought to him so he could pray over her. He said the same words he had said to the sick boy. The woman’s eyesight immediately was restored. News of this miracle was soon widespread, and people began coming from all over to ask him to pray for them and lay hands on them.

Nicholas gained notoriety as a preacher, confessor, and a healer. He settled in a monastery in Tolentino and would spend the rest of his life there. Here he was a pastor to the people and did all he could to help the poor. He prayed over countless people who asked him to do so. Many were cured of their illnesses. Through it all, Nicholas spent as much time as he could fasting and performing personal acts of penance. He was an inspiration to everyone.

The story is told that one day, after spending a long time fasting, Nicholas became weak and could barely stand. He had a vision of the Blessed Virgin Mary and St. Augustine who told him to eat the bread marked with a cross and soaked in water. Nicholas did as he was told and immediately, his strength was restored. That is how the Augustinian practice of blessing and distributing St. Nicholas Bread began, a custom carried on to this very day.

A significant part of the story of Nicholas has to do with Purgatory. It seems that one night, while asleep, Nicholas heard the voice of a deceased friar he had known. The friar told Nicholas that he was in Purgatory and pleaded with him to offer the Holy Eucharist for him and the other souls that were there with him. He told Nicholas this would help get them released from there.

Nicholas did as asked and prayed for the friar for seven days. After this, the friar returned to him and told him that a number of souls had been released and were now with God. Because of this Nicholas was proclaimed the patron of the souls in Purgatory by Pope Leo XIII in 1884.

There is also much legend that surrounds St. Nicholas, including resurrecting children, saving people about to drown on a sinking ship, and even saving the burning palace of the Duke of Venice by tossing a piece of blessed bread into the flames. He is also said to have seen in a vision the transport of the Holy House of Loreto by angels. What is certain is that Nicholas of Tolentino was a caring, kind priest who did all he could to help his neighbors, no matter who they were.

He died in Tolentino on September 10, 1305. He was canonized a saint by Pope Eugene IV, in 1446. He was the first Augustinian friar to be canonized after the creation and approval of the Order of St. Augustine in 1256.

St. Nicholas of Tolentino, please pray for us and all our Departed.

Read more:
Eerie messages from the dead at the Museum of the Souls of Purgatory