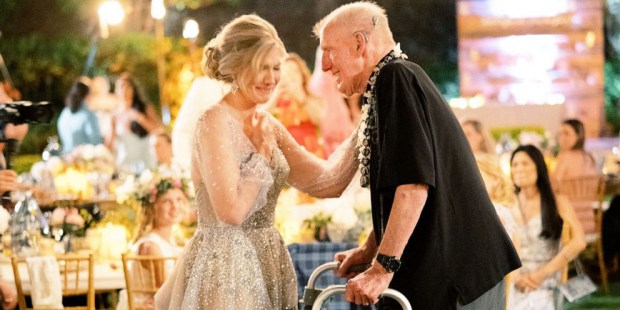 It was a moving and memorable moment for father and daughter at her wedding.

Bruce Walton, a former NFL football player, became gravely ill in 2017. Pneumonia weakened him and led to a fall, with a series of complications including meningitis and kidney failure. It looked as though he wouldn’t live to see his daughter Harmony’s wedding day. Walton even spent four months in an induced coma.

However, his strength of will and the skill of his doctors made it possible for him to get back on his feet, although with two limitations: he needs to use a walker to stand or walk (due to chronic dizziness), and he has lost his hearing. Of course, these two things are significant obstacles to a very special part of the wedding celebration: the father-daughter dance.

Time to share another epic @jamesandschulze photo from our recent @fsmaui wedding. This one as seen over on @brides has over 30k likes in less than a day and that pretty much sums up how much I love it too. My dad was near death not that long ago and whe… https://t.co/6EipNmSmNs pic.twitter.com/EqfbIr9h3K

When the wedding took place, Harmony told her father he didn’t have to do the father-daughter dance if he wasn’t comfortable with it, but he refused to lose out on that precious moment. He decorated his walker with leafy branches and asked his daughter to have them play Israel Kamakawiwo’ole’s rendition of “Somewhere Over the Rainbow.”

The beautiful and loving moment was immortalized in this video, where we can also see how Harmony mouths the words to her father so he can follow the song’s rhythm.

After surviving complications from an illness, this father was able to share a magical dance with his daughter on her wedding day. ❤️ pic.twitter.com/ea0KGzLHwn

In an interview after the event, Walton told Good Morning America, “It was very emotional for us both. I had zero rhythm with my dance moves but I didn’t care. It was one of the most beautiful moments of my life, freeze framed in my mind forever.”

Read more:
Bride plays video of father-daughter dance with her dying dad at her real wedding

Read more:
5 Brothers bring their sister to tears on her wedding day