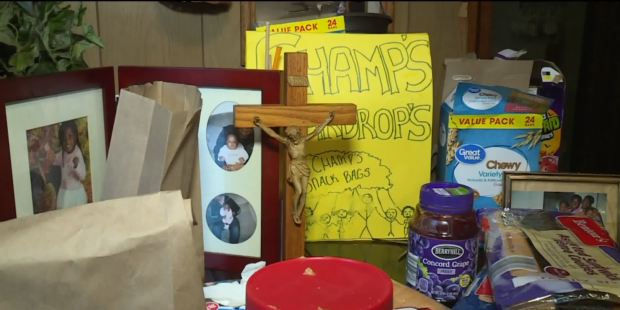 A recent GoFundMe raised nearly $30,000 for this charitable effort.

Childhood hunger is a serious issue in America, which NoKidHungry.org estimates affects the lives of 12 million kids each year. While there are government programs in place to provide them with much-needed developmental nourishment, sometimes they slip through the cracks. That’s where Champale Anderson comes in.

Champale Anderson is raising six children of her own, but every day she finds the time and resources to put together dozens of nutritious snacks and lunches for the children of her community, all from her very own home. Talia Kaplan, of Fox News, reports that Anderson has an “open door policy” during the school week, which welcomes any child from the neighborhood, who she calls her “special babies”, to come in and eat before and after school.

“I was noticing how the kids, they would always be hungry,” Anderson told the Fox affiliate KTVI.

The bagged lunches are reported to contain PB&J sandwiches, cookies, fruit, vegetables, juice and snacks. Anderson explained that she puts together about 100 bagged lunches each day, but sometimes she has to go and make more. She mentioned that she has considered upping her production to 150, in order to ensure that no child be left hungry.

“It makes me proud and I want to keep it going. My goal is to, I want to go to different neighborhoods and give out bags,” Anderson said.

Anderson advertises her charitable works with a solitary sign on her front lawn which reads: “Champs Tear Drops: Free Snack Lunch Mon-Fri.” The sign goes on to mention that donations are needed for the lunch supplies. She also has received generous funding thanks to a GoFundMe campaign, started on August 28th. The GoFundMe asked for $1,500 and has already raised more than $29,000, in just 2 weeks.

Anderson told the Fox affiliate KTVI that she tries to live her life by the guiding principles of Mother Teresa, which she summed up with one quote from the founder of the Order of Missionaries of Charity:

“I alone cannot change the world, but I can cast a stone across the waters to create many ripples.”