This is where St. Ignatius begged for money to pay for his studies

Whenever you are in Barcelona, make sure you follow Ignatius’ steps from the Carrer De Sant Ignasi (Saint Ignatius’ Street) to Santa María del Mar.

The church of Santa María del Mar is home to a touching sculpture of the beloved Basque saint, right where he used to sit as a beggar.

The “Ignatian Camino” is a pilgrimage road that goes from Azpeitia, the native town of St. Ignatius of Loyola, to Manresa, following the steps of the popular Basque saint. As this road grew in popularity, it ended up earning a place of its own among other, more famous pilgrimage routes in Europe, such as the Camino de Santiago and the Via Francigena.

Interestingly, this route leaves out a city in which Ignatius found himself three times: Barcelona.

The first time Ignatius set foot in Barcelona, he stayed there for only a month, as he was preparing his trip to Jerusalem. He arrived in the city on February 18, 1523, and set sail for Italy on March 20. The third time he was there, he stayed for three months, while on his way from Salamanca to Paris, where he finished his studies. But the second time he visited Barcelona, he stayed for almost three years. This second trip was, by far, the most important one.

Read more:
Did you know that an Ignatian retreat can change your brain?

When Ignatius returned from Jerusalem, he had already discerned his calling to the priesthood, and so he went to Barcelona to study Latin and grammar under the guidance of Maestro Ardèvol, who had already given Ignatius private instruction. In fact, it was Ardèvol himself who invited the saint to Barcelona, as he had recently accepted a position in the city’s university, as Ignatius recalls in his Autobiography (numbers 54 and 55).

During those two years (1524 and 1525), Ignatius begged for money to support himself as a student, sitting on a step of a lateral chapel at the church of Santa María del Mar, one of the most outstanding examples of Catalonian Gothic architecture, which was built between 1329 and 1383. In the year 2016, on the feast of St. Ignatius (July 31), a chapel was built on the spot where he used to sit (with a plaque to indicate the exact spot), including a touching bronze sculpture of the saint, the work of the Catalonian sculptor Lau Feliu.

Whenever you are in Barcelona, make sure you follow Ignatius’ steps from the Carrer De Sant Ignasi (Saint Ignatius’ Street) to Santa María del Mar: the road will take you through the narrow, medieval streets of La Ribera and El Born districts to the Plaça De Santa Maria, where you can visit not only this church, but also plenty of small local restaurants, book shops, and cafés. Make sure to visit the slideshow below to discover Saint Ignatius’ chapel in Santa María del Mar 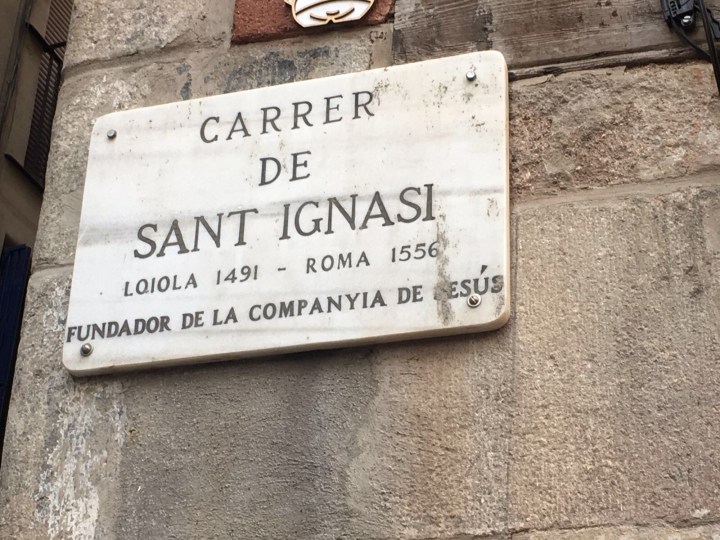