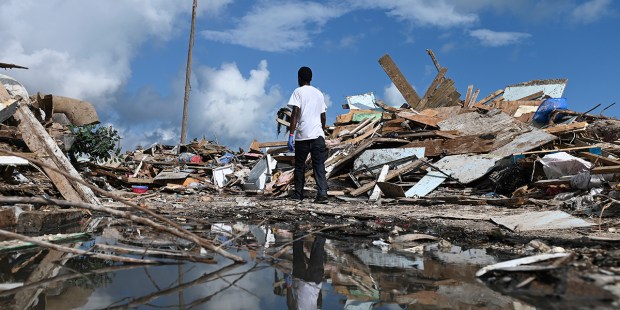 Death toll at 50 and expected to rise.

Two weeks after Hurricane Dorian left a trail of destruction in the Bahamas, some 2,500 people are unaccounted for.

The death toll stands at 50, though that number could rise as emergency personnel continue to comb through wreckage.

Dorian slammed into Abaco Island Sept. 1 as a Category 5 storm and later lingered over Grand Bahama, bringing destructive flooding. Americans watched to see if it would make landfall in Florida. It didn’t, but hit North Carolina’s Outer Banks before heading up the Atlantic Coast.

In the Bahamas, according to PBS Newshour, a preliminary report estimates Dorian caused a total of some $7 billion in damage. And, according to Time magazine, the lack of access to toilets, clean water and medications is putting tens of thousands of residents at risk for disease.

The fact that 2,500 people are unaccounted for—a figure reported by Bahamian National Emergency Management Agency—doesn’t mean the death toll will necessarily go that high. Names on that list have not yet been checked against official lists of people currently in shelters or those who were evacuated, said the Huffington Post. And about 4,000 people have left the Bahamas and entered the United States, according to immigration authorities.

Nevertheless, the number of deaths is expected to “significantly increase” in the coming days and weeks, said Prime Minister Hubert Minnis.