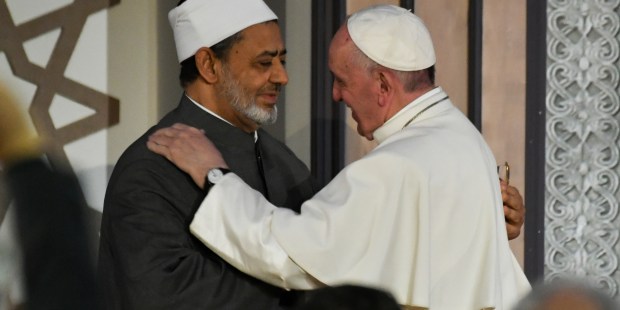 Pope Francis (R) and Sheikh Ahmed al-Tayeb, the Grand Imam of Al-Azhar, embrace during a visit of the Pope to the prestigious Sunni institution in Cairo on April 28, 2017.
Pope Francis began a visit to Egypt to promote "unity and fraternity" among Muslims and the embattled Christian minority that has suffered a series of jihadist attacks. / AFP PHOTO / Andreas SOLARO
Share
Print
J-P Mauro | Sep 12, 2019

The new committee was formed by the United Arab Emirates as part of their “Year of Tolerance.”

During the first meeting of a new committee formed by the United Arab Emirates, Catholic and Muslim leaders prayed for the victims of September 11th, as well as the victims of all instances of terrorism. The group, which gathered for the first time on September 11th, was designed with the purpose of bringing to fruition the goals outlined in a joint statement by Pope Francis and the Grand Imam of al-Azhar Ahmed el-Tayeb, commonly called the Abu Dhabi declaration.

“all persons who have faith in God and faith in human fraternity to unite and work together so that it may serve as a guide for future generations to advance a culture of mutual respect in the awareness of the great divine grace that makes all human beings brothers and sisters.”

Courtney Mares, of CNA, reports that the committee is composed of two from the Roman curia and five members from the UAE and Egypt. Serving as president of the committee is Bishop Miguel Ángel Ayuso Guixot, President of the Pontifical Council for Interreligious Dialogue, who is set to be named a Cardinal, along with a dozen other Bishops in October.

During the first meeting, the committee proposed that the United Nations initiate a “Day of Human Fraternity.” They hope that the UN could settle on a date between February 3-5, as this is the anniversary of Pope Francis visit to the United Arab Emirates.

Before the meeting ended, representatives from each faith prayed in their own customary way for the victims of 9/11, and extended the prayers to all victims of terrorism. Ayuso commented to Vatican News sources:

“Prayer, dialogue, respect and solidarity are the only winning weapons against terrorism, fundamentalism and all kinds of war and violence.”