This Sunday’s readings define us with 3 Vs 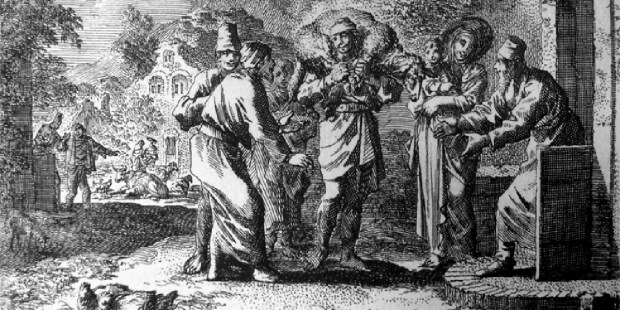 We hear this weekend the Gospel within the Gospel, which distills the entire Christian message about a human soul’s worth.

Religious people sometimes forget the value of the people we meet in the world – and the grave peril they are in. Or, maybe we see it in others but not ourselves.

The readings for the 24th Sunday in Ordinary Time Year C include the entire 15th Chapter of Luke — the “Gospel within the Gospel,” which distills the entire Christian message about a human soul’s worth.

First, the story of the lost sheep says: “You are vulnerable.”

When a sheep gets separated from its flock and is lost, the sheep doesn’t look for a way home — it gives up. It lies down, helpless. You can’t call a sheep to come. You have to look for it, and when you find it, the sheep won’t follow you back. You have to pick it up and carry it.

That is the image of a soul without God and a community: Lost, alone and helpless. Like sheep, our moral courage comes from the flock, and our direction and purpose come from the Shepherd leading us. Being on our own isn’t empowering; it is enfeebling, putting us at the mercy of whatever comes along.

That is how St. Paul felt when he was away from Jesus. “I was once a blasphemer and persecutor and arrogant, but I have been mercifully treated because I acted out of ignorance in my unbelief,” he says in Sunday’s Second Reading.

He adds, “Jesus Christ came into the world to save sinners. Of these I am the foremost.”

Saints like Paul can sound like they are exaggerating when they proclaim themselves the world’s worst sinners. But when you consider how much God did with them, you can see their point.

Paul’s sin was great because his talents were meant to change the world. Which brings us to the next point.

Second, the story of the lost coin says: “You are valuable.”

Think about the repercussions of this parable: Each of these stories is about God losing one of us. Here, he is comparing himself to a poor woman for whom losing one of 10 coins is an enormous problem, and finding it is life changing.

When she does find it, she calls her neighbors to celebrate.

We are each that valuable to Jesus, and his response to finding us is the same.

St. Paul said, “I am grateful to him who has strengthened me, Christ Jesus our Lord, because he considered me trustworthy in appointing me to the ministry.”

Each of us can say the same thing. Jesus Christ didn’t just find us and affirm us; like a poor woman desperate for every coin, he sees us each as a game-changer. He is eager to spend each one of us on what he needs. The plans he has made just won’t work without us. But be careful, because …

Third, the story of the Prodigal Son says: “You are vain.”

The long form of Sunday’s Gospel includes the Prodigal Son, a parable rich with meaning. But look at what it says about the sons, who are stand-ins for us: We may be vulnerable and valuable, but we are also vain and egotistical.

It starts with the astounding vanity of the younger brother, who demands his inheritance early, thereby disowning his father and splitting his family, all while dealing them a devastating financial blow.

It ends with the mirror story of the older brother, who also proudly refuses his father’s wishes in a way that would preserve the split in the family.

We show the same vanity as both of them when we sin, disowning our father, splitting God’s family, and taking the “coin” of our lives that God so eagerly wants, spending it on evil.

Worse, we choose the two brothers’ sins again and again. We are like prodigals who keep taking off with our father’s money, and big brothers who keep refusing to welcome other sinners.

We are like the Israelites in the First Reading who were “brought out of the land of Egypt with such great power and with so strong a hand” and yet “have soon turned aside from the way … making for themselves a molten calf and worshiping it.”

For them, a golden calf was a potent symbol of money and power and pleasure — which are exactly the temptations that win us over to this day.

“I will rise and go to my Father,” we pray in the Psalm.

The father in the story of the Prodigal Son has the same reaction to both sons. He doesn’t punish either one, but tells them that all he has is theirs and invites them to celebrate.

That’s what he invites us to at each Mass. He knows we are vain. He has mercy on us anyway, because he also sees our great value – and knows how vulnerable we are without him.