This widow found peace as a nun on a Greek island 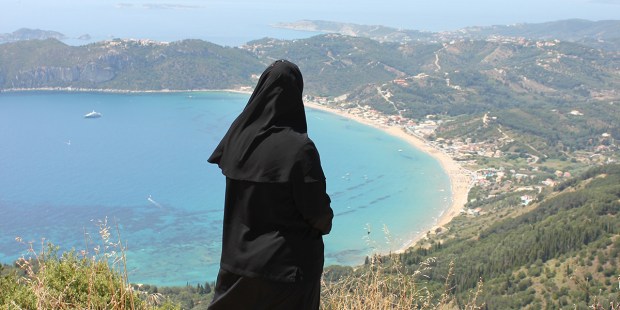 Sister Irini has found a place to slow down and contemplate God’s beauty.

National Geographic writer Terri Steel caught a hint of what drives some people to give up everything modern life has to offer and retire to a monastery.

“Amorgos’s many monasteries, among the oldest in the world, draw tourists by the thousands,” Steel writes of the Greek island southeast of Athens. “And its unparalleled beauty—rough and raw with azure blue seas and sky—causes one to slow down and linger.”

Everything in Amorgos moves slower, but it’s worth the wait. Rich coffee brews in copper pots on heated sand. Piping hot baskets of sardines are served with feta cheese—crispy, salted, or chilled—alongside morning-picked tomatoes and olives with warm baked bread.

Slowing down, waiting, lingering. That very much describes the attitude of a monk or nun in the hesychast tradition. The Jesus Prayer, for example, recited according to the natural rhythm of one’s breathing, has the effect of slowing one down inside. One is able to linger over a passage of Scripture without feeling the need to get to the end of the chapter.

Photo by @chiaragoia | Sister Irini talks to a sheep near St. George Valsamitis monastery where she lives on the island of Amorgos, in Greece. Sister Irini is a Greek Orthodox nun who came to Amorgos for the first time 35 years ago as a tourist with her children and her husband. She fell in love with the island and she returned here as a nun 7 years ago when she took over an abandoned monastery and restored it herself. She spends her days gardening, painting, and praying, but always welcomes visitors to her monastery. #greece #amorgos

Nevertheless, something attracted Sister Irini to this island when she came as a tourist 35 years ago. She is now the only nun on Amorgos, and she welcomed Steel and a photographer, Chiara Goia, as she would welcome any visitor. National Geographic, being what it is, focuses on the natural beauty of the island, the traits of the inhabitants, the local lore.

With only two Motto machines (ATMs) that are often devoid of money, the thousand or so year-round residents simply barter among themselves. Homegrown or fresh-caught food is served alfresco and prepared on the spot, albeit leisurely.

After her husband passed away, Sister Irini came back to Amorgos, took vows and restored an abandoned monastery, St. George Valsamitis. “It was empty and alone, and I had to work hard to make it paradise,” she said.

This Greek Orthodox nun spends her days praying, writing icons, and gardening, Steel tells us. She always welcomes visitors. Priests visit weekly from the island’s Hozoviotissa monastery, which was established by Byzantine emperor Alexius Comnenus in the late 11th century.

She won’t tell Steel what her original name is. Irini, her religious name, means peace.

It certainly sounds like that is what she has found in her new life.