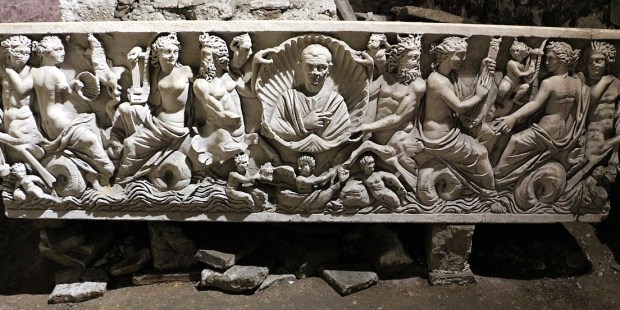 Thousands of years of history lie beneath Rome’s buildings, and the churches are no different.

Click here to launch the slideshow
With so many wondrous sights to behold in the historic Trastevere district of Rome, the Basilica of San Crisogono can sometimes be missed by tourists. The building is as beautiful as many of the sights in the Eternal City, and is the burial site of Blessed Anna Maria Taigi, but the church has historical significance that has gone largely unknown.

Those who walk the streets of Rome know that there are thousands of years of history below their feet, and the Basilica of San Crisogono is no different. In 1907, Fr. L. Manfredini and Fr. C. Piccolini investigated an area beneath the sacristy, only to find the remains of the very first church built on the site.

The ruins are believed to come from the 4th century, during the reign of Constantine. Within the ancient ruins was found a shrine to St. Chrysogonus, an early martyr of the Church, for whom the basilica was named. The walls of this ancient ruin feature many frescoes, which LatiumMirabile from Atlas Obscura describes this way:

“Here, 8th-century frescoes representing three saints, including Chrysogonus, are still visible. What’s more, in the space between the foundation wall of the more recent basilica and the Paleochristian church wall, another cycle of vivid frescoes from the 10th and 11th centuries depict scenes from the lives of Saint Benedict and Pope Sylvester, among others.”

Also discovered on the site is the remains of a 3rd-century Roman domus, or an upper-class house. While archaeologists are not certain of the timeline, they believe that this house belonged to a wealthy early Christian, who converted his house to a church where persecuted Christians could worship out of sight of the Roman Legion. The site would later be consecrated and the old basilica was built in its place.

Your Guide to Trastevere explains that the ruins cannot be properly excavated, because the foundation of the upper church obstructs the structure. It is because of this that we may never know the precise history of this ancient church. However, it can be accessed by the public for just 3 euros.

The Basilica of San Crisogono makes time for tourists to explore the ruins each weekday from 7:30 a.m. to 11:30 a.m. and 4 p.m. to 7 p.m, with shortened hours on the weekends. As the site is not particularly popular, visitors often find that they have it to themselves. It is advisable to call ahead for more information.