Why Pope Benedict XVI was known as the “Green Pope” 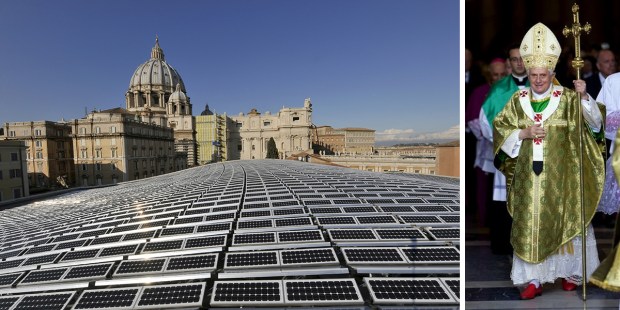 Before Pope Francis, the media praised Benedict for his ground-breaking stance on protecting the environment.

While Pope Francis is generally regarded as a pope who has made great strides in promoting environmental stewardship, the media have only dubbed one pope the “Green Pope.”

Interestingly enough, multiple media outlets labeled Pope Benedict XVI the Green Pope for his ground-breaking stance on protecting the environment. The appellation came primarily after Pope Benedict chose an interesting theme for the World Day of Peace in 2010.

He chose If You Want to Cultivate Peace, Protect Creation for his theme, and detailed why the misuse of creation has been a principal cause in world conflicts. Benedict opened his message with a stirring appeal that sounds like it could have come from the mouth of Pope Francis.

Respect for creation is of immense consequence, not least because “creation is the beginning and the foundation of all God’s works,” and its preservation has now become essential for the pacific coexistence of mankind. Man’s inhumanity to man has given rise to numerous threats to peace and to authentic and integral human development – wars, international and regional conflicts, acts of terrorism, and violations of human rights. Yet no less troubling are the threats arising from the neglect – if not downright misuse – of the earth and the natural goods that God has given us. For this reason, it is imperative that mankind renew and strengthen “that covenant between human beings and the environment, which should mirror the creative love of God, from whom we come and towards whom we are journeying.”

Not only did Pope Benedict speak about the protection of creation, but his actions backed up his words.

According to National Geographic, “He approved a plan to cover the Vatican’s Paul VI hall with solar panels, enough to power the lighting, heating, and cooling of a portion of the entire country (which covers, of course, a mere one-fifth of a square mile). He authorized the Vatican’s bank to purchase carbon credits by funding a Hungarian forest that would make the Catholic city-state the only country fully carbon neutral. And several years later, he unveiled a new hybrid Popemobile that would be partially electric.”

It is true that Pope Francis wrote the first encyclical that dealt extensively with various ecological concerns, but Pope Benedict was the one who laid the groundwork and was extremely vocal on the importance of being a faithful steward of creation.

In many ways, Pope Francis is simply building upon the legacy of Pope Benedict, continuing the work he began.

Read more:
What Pope Francis has said about the environment, in 10 quotes

Read more:
The Challenging Truth of Pope Francis’ Encyclical on the Environment