A modern-day saint for those suffering addiction 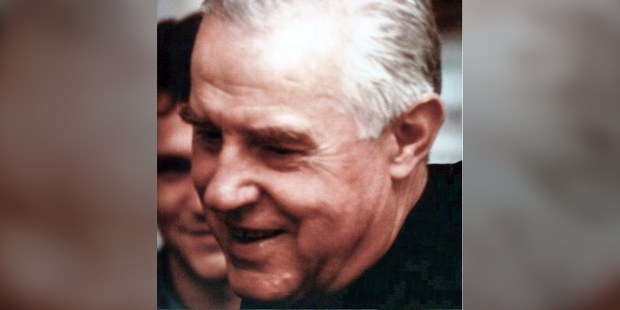 Enzo Boschetti was born on November 19, 1929, in Costa de ‘Nobili, in northern Italy. He was the second of three children, born to a simple family who struggled to make ends meet.

As an adolescent Enzo attended local Catholic Action meetings, which stirred his desire to follow Christ. He received a copy of Story of a Soul by St. Therese of Lisieux and it had a profound influence on him. In 1949 he left home and joined the Discalced Carmelites at the convent in Monza, taking the name Fra Giuliano.

Enzo’s initial feelings had been leading him to the priesthood, but his superiors directed him to the consecrated life. For the next seven years, he lived as a simple friar, filling his days with fasting, penance, and household tasks. His Carmelite experience was becoming part of who he was, but it was not overtaking his desire for Holy Orders.

His priestly calling took firm hold of him when in 1956 he was sent to the Carmelite mission in Kuwait. He decided to seek the priesthood but his Order did not allow for a person to move from the religious to priestly life. Enzo truly loved the Carmelites and leaving them would be painful. However, after much prayer and after going through a discernment period that caused him to almost have a nervous breakdown, he decided to become a priest. To the dismay of his Carmelite superiors, he left the Order and headed to Rome.

On June 29, 1962, Enzo Boschetti was ordained to the priesthood by Carlo Allorio, the Bishop of Pavia. His first assignment was as a parish priest in Chignolo Po near Milan. But in 1965, he was reassigned to St. Salvatore parish in Ticinello, a poor area where there was much hardship.

He was appalled at the many teenagers roaming the streets and using drugs, gambling, selling stolen goods, not going to school, and living their young lives without purpose. He wanted to help them as much as he could. Drugs and gambling were a big part of the neighborhood culture and many people, including teenagers, were addicts. Don (Father) Enzo quickly decided he had to do something about it. He also knew that his primary focus would be to find a way to prevent young people from becoming addicts. He had embraced a daunting challenge.

Read more:
He was an opium addict who couldn’t receive the sacraments. But he’s a martyr and a saint

Don Enzo’s evangelical response to the problems confronting him was to reach out and tell young people that he was available to talk to anyone who needed a helping hand or a listening ear. The area was filled with young people moving up from southern Italy, away from families, looking for work. These young folks soon began knocking on Don Enzo’s door. He would let them stay in the prayer room for the night. The ping-pong tables, billiard tables, and the floor were used as beds. Word quickly spread and soon a bigger facility was needed.

Volunteers joined Don Enzo to help him, but the phenomenon of drug addiction led him to reach out for help. With the help of some evangelical laymen, a small building was purchased and dubbed Casa del Giovane (Young Man’s House). The plan was to use it for those who suffered from gambling or drug addictions.

His promise to the young people was that he would be there to help them if needed. He also committed to being there to intervene for adolescents who were beginning to show signs of addiction. He was an advocate for healthy living and would walk the neighborhoods making friends and talking about clean living as taught in the Gospel.

By the 1980s he had established workshops for addiction and set out to get courses included in schools. He loved St. Joseph and often encouraged the young and old alike to pray to him for help and protection. He proposed an educational method that included real sharing among educators, volunteers, and the addicts (children and adults alike) who were participating. All he ever suggested was inspired by the Gospel and supported by prayer.

Don Enzo Boschetti passed away from pancreatic cancer on February 15, 1993, at the age of 63. He was declared “Venerable” by Pope Francis on June 11, 2019. Part of his legacy is the following prayer: