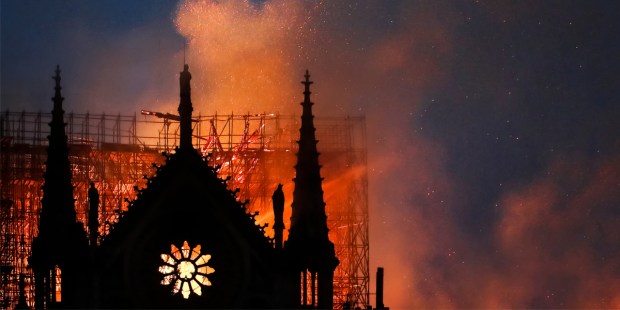 Metal from cathedral’s roof and spire produced particles that have settled in homes, schools, parks and restaurants.

While authorities in Paris and those responsible for the Cathedral of Notre Dame might not be certain about how to rebuild after the April 15 fire, one thing is for sure: lead will not be part of reconstruction.

But particles of the poisonous metal are probably still in the atmosphere and environment near the beloved cathedral, after the lead tiles of Notre Dame melted in the horrific conflagration.

And worries about health safety, particularly of children, have increased as revelations about the hazard have come out in recent months.

After all, there were 460 tons of lead tiles covering the cathedral’s roof and spire, all of which melted, and tiny particles of some of that lead mixed with the plume of smoke that drifted over Paris, the New York Times reported. “Then that lead-laced dust settled on buildings, squares, parks, and plazas, tests indicate. It also is likely to have made its way through open windows, air-conditioning ducts and other building ventilation systems,” the newspaper said.

Lead exposure can have serious consequences for the health of children, says the World Health Organization. At high levels of exposure, lead attacks the brain and central nervous system to cause coma, convulsions and even death. Children who survive severe lead poisoning may be left with mental retardation and behavioral disorders.

Although authorities found that there was a problem with lead contamination only two days after the fire—at a day care center at the police headquarters across the street from the cathedral—they allowed some children to play for months in schoolyards and day care centers, and to sit in classrooms, whose surfaces were tainted, the Times found.

“The authorities failed to clean the surroundings of the cathedral in the immediate aftermath of the fire, waiting more than four months to complete a total decontamination of the neighborhood,” the Times said. “Of roughly 400 children who have been tested, 8.5% showed levels at or above risk thresholds, according to the Regional Health Agency.”

The Times surveyed a number of experts on the advisability of visiting Paris at this point, and the general consensus is that it is safe, but that precautions should be taken.

“Businesses in the area of the cathedral have been cleaned. Eating a croque-monsieur at a restaurant on the Île de la Cité, where Notre Dame sits, or drinking a glass of rosé on a restaurant terrace, is unlikely to result in lead contamination, French experts said,” according to the Times.

All the experts suggested a range of precautionary measures, ranging from avoiding the immediate area, especially if visitors have children below the age of 6, to washing the hands of infants so that they don’t pick up dust and put it in their mouths.

One doctor urged parents to “be sure that their children had a diet with a good, nutritional dose of iron and calcium, which can displace lead in the body and make the body less likely to absorb it.”

Tourists who were in the vicinity of the cathedral since April 15 probably would not have accumulated much lead, said Dr. Morri E. Markowitz, director of the lead treatment and poisoning prevention program at the Children’s Hospital at Montefiore in New York. Residents or those who work nearby, however, might have, and it would be best for such people to get tested. Pregnant or nursing mothers who have been exposed to lead should also be wary, he said. Lead passes through the placenta and can be passed through mother’s milk, he pointed out.