What Caravaggio’s paintings of St. Matthew teach us about the cost of greatness 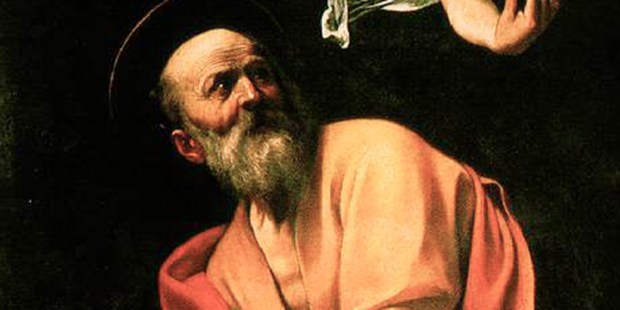 These famous renditions of the saint’s life show us what it takes to live our best life.

In 1599, a young artist named Michelangelo Merisi da Caravaggio signed a contract to decorate the burial chapel of a rich cardinal. The chapel was to be dedicated to St. Matthew, the cardinal’s name saint. The painting on the left of the altar was to show the calling of St. Matthew by Jesus to cease tax collecting and become a disciple. The painting on the right was to show his martyrdom. The painting in the middle, directly above the high altar, was to depict the inspiration of St. Matthew as he was hard at work on writing his Gospel.

Caravaggio himself was a highly conflicted man. He was a magnificent painter who pushed the boundaries of greatness in art, and his work is full of dramatic lighting and highly literate, thoughtful compositions. But in his actual life Caravaggio knew trouble. He quarreled with everyone around him, lived fast and loose, and is even suspected of having committed murder. Without a paintbrush in his hand, he never quite got it together, but as an artist he is unparalleled both for his technique and the depth of his insight.

The three paintings of St. Matthew were completed and now decorate the Contarelli Chapel in Rome. When viewed one after another, they tell a powerful story about the cost of achieving greatness …

In the first, The Calling of St. Matthew, Matthew is huddled in a dim room with his friends while Jesus and St. Peter stand at the door and point him out. The identity of Matthew himself is not entirely clear. He’s probably the bearded man who seems to be pointing at himself as if to say, “Who? Me?” Another theory is that the bearded man is actually pointing at the young man at the end of the table with his head slumped as if to say, “Who? Him?” If the young man with his head down is Matthew, then the scene captures the moment just before he raises his head and sees Christ for the first time. Either way, the moment is bursting with import. The hand of Christ may seem familiar, and that’s because it is an exact replica of the hand of Adam from the Sistine Chapel. In that famous painting, the hand of Adam is about to touch the hand of God. There’s electricity between the two fingers as the hand of God prepares to impart a soul to the very first man – it is the moment of creation. For Matthew, meeting Jesus is his rebirth. He is being called into new life.

When I look at this painting, I feel the hand of God upon me, too. Left to my own devices, I’m all too willing to sit in metaphorical darkness, wasting away my days in laziness and lack of direction. I will always take the easy way out, always take the path of least resistance. But every once in a while, God shouts at me loud enough and I look up long enough to see him beckoning me to walk out that door into the light.

The second of Caravaggio’s paintings thematically is The Inspiration of St. Matthew. In it, an angel whispers reminders and helpful tips to Matthew as he writes his Gospel. Matthew is tense with excitement and in the midst of an artistic reverie. This is actually the second version of the painting. The first that Caravaggio painted was too controversial for his patron, showing Matthew as too humble and rustic. So it was painted a second time.

While I like this painting, it is my least favorite of the three. I’m sure it caused Caravaggio no end of heartache and I can only imagine his frame of mind as he was forced to start all over again when he had already produced a perfectly good painting. Even though Matthew is in the midst of the excitement of creative effort, he too must have labored intensely on his work. At times, he may have tired of it or despaired that he was a good enough writer.

As a writer myself, I occasionally encounter similar instances of self-doubt. As a priest, I experience self-doubt on pretty much a daily basis. God has called each of us to a heroic life, to be great in our own way. That much is true. It is equally true that grasping that calling is filled with hesitations, doubt, and hard work. But do we want to go back to our comfortable, boring table in the dim, musty room? Or are we willing to pay the cost to achieve a life truly worth living?

The third painting in the series is my favorite, The Martyrdom of St. Matthew. Caravaggio struggled with this one, too, and x-rays of the painting reveal that the current version is painted on top of an earlier version. What he finally painted is worth the effort, because it’s amazing. The center of the scene is a single, violent act. Everyone draws back in horror, including Caravaggio himself. He put himself into the painting, the bearded man near the back looking sad and slightly guilty. The two people in the foreground are without clothes because they were about to be baptized in the pool that lays just at their feet. In the background is the altar of the church.

Matthew was martyred in Ethiopia where he had traveled to preach and build the Church. The King and Queen of Ethiopia became Christians, but the subsequent king, Hirtacus, found Matthew troublesome and had him killed by an assassin. In the painting, the assassin is disguised as one of the baptismal candidates. As Matthew is about to receive the death blow, he is already bleeding and his blood mingles with the baptismal water, just as the heart of Christ burst forth with blood and water at the Cross.

Just as the blood of St Matthew mingles with the sacramental water at the foot of the altar, all new life first requires a death. If I am going to move forward, I must bury a piece of myself before rising from the womb of the baptismal font.

In Caravaggio’s bold paintings is an unflinching reflection on the nature of what it means to live and die, what it means to strive and suffer. For the artist, St. Matthew’s martyrdom is the saint’s ultimate victory. It’s all too easy to shrink back and live a mediocre existence that’s already a sort of involuntary, living death. Or, we can accept the challenges that God places before us and live our best life, never counting the cost.

Read more:
This artist used his paintings to conquer depression