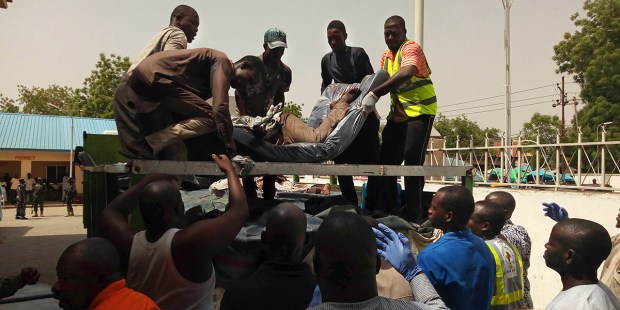 100,000 people cut off from aid as military no longer protects key roads from ISIS and Boko Haram.

Humanitarian aid to people in Nigeria is not getting through because of a resurgence of Boko Haram and the West African branch of the Islamic State.

Both groups seem to be discovering new freedoms as the Nigerian military has tried a new approach to fighting the insurgents.

Reuters news service and the New York Times both have reported on the groups having a freer rein as Nigeria’s military has withdrawn to “super camps” in various parts of the country.

The new strategy, announced last month, masses military personnel in key towns that can be more easily defended and from which soldiers would better be able to respond to insurgent attacks.

But that leaves many areas unprotected, and in the words of a Reuters article on Monday the Islamic State is “filling the void.”

ISIS in West Africa evolved in 2016 as a group split from the Boko Haram insurgency, which itself started in 2009 in order to overthrow the government and establish an Islamic caliphate.

The New York Times on Friday reported that the faction has received propaganda guidance from the Islamic State in Syria.

“The army’s withdrawal into large bases has coincided with a string of insurgent raids on newly unprotected towns and has left the militants free to set up checkpoints on roads as they roam more freely across the countryside, according to three briefing notes from an international aid and development organization, two security officials and residents,” Reuters reported.

Soldiers are no longer protecting some key roads, cutting off access for humanitarians workers as more of the region falls under the sway of the insurgents, aid and security sources said.

The population of towns being abandoned by the military is a combined 223,000 people, according to one of the aid agency briefing notes.

The military departures so far have cut off more than 100,000 people from aid and if more soldiers go, as many as 121,000 other civilians could flee their towns, one aid agency briefing note said.

At the same time, ISIS is trying to woo locals, the wire service said. Some residents said life is more stable in areas controlled by the insurgents.

In the northeastern town of Gubio, for example, an Islamic State fighter led evening prayers followed by a sermon, according to six people who live there.

“We are here to protect you, not to harm any one of you,” the IS fighter told residents. “Those with uniforms are your enemies, and we are here to deal with them and their supporters. You should feel free.”

Rather than flee to a government-controlled city such as Borno state’s capital Maiduguri, many Gubio residents stayed.

Meanwhile, Boko Haram militants are “still roaming the countryside with impunity,” the Times reported. This too is happening in the wake of the military’s new strategy. “Their fighters now have more sophisticated drones than the military and are well-armed after successful raids on military brigades, according to local politicians and security analysts.”

In spite of any stability ISIS purports to provide on a local level, the humanitarian situation overall is looking bleak. Said the Times, “The war with Boko Haram has devastated the population in rural northeast Nigeria, one of the poorest regions on earth. More than two million people have fled their homes, tens of thousands have been killed and many more injured, abducted and conscripted to join the fight. The International Committee of the Red Cross said this week that nearly 22,000 Nigerians have been reported missing during the crisis.”

“Some aid groups are scaling back, deeming the conflict so protracted that it is no longer an acute emergency,” the newspaper said.