But it also includes some other architectural elements that made it a pretty avant-garde building in its day and age.

The church of Santa María del Naranco (St. Mary of Mount Naranco) is a Roman Catholic pre-Romanesque church on the slope of Mount Naranco, only three kilometers from Oviedo in Asturias, northern Spain. Only 20 meters long and 10 meters wide, it is a UNESCO World Heritage Site.

It was king Ramiro I of Asturias who ordered the construction of a royal palace that was supposed to be part of a larger complex, which included the nearby church of San Miguel de Lillo, 100 meters away from the construction site. The whole complex was completed in 842, and the church was consecrated in 848.

But if it was built as a royal palace, how did it turn into a church?

Even though the construction was originally part of a series of royal buildings located in the outskirts of Oviedo (one can see the city from the hill), the palace was converted later in the 12th century into a church dedicated to the Virgin Mary. Originally known as the Palace of Santa María del Naranco, the building itself then became an interesting blend of both pre-Romanesque and Romanesque Iberian artistic elements. For instance, this is the very first building in the Iberian Peninsula (some say) that includes a Greek cross in its façade (a symbol of the Asturian monarchy).

Even if some of its very foundational, structural features are distinctively Romanesque, the clearly vertical orientation of the building make it, somehow, a precursor of what would be the later Gothic style. 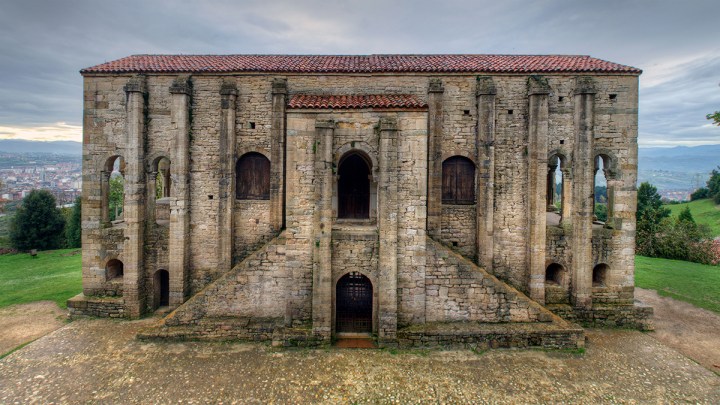