Woman narrates soccer games for her blind son; both nominated for FIFA prize 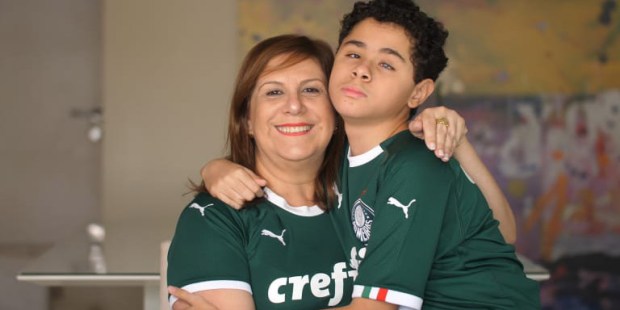 In 2018, a TV report told the story of Sílvia Grecco, who narrates soccer games (“football” for everyone but Americans) for her son Nickollas, who suffers from blindness and autism. She brings her son to all the games of his favorite team, Palmeiras, in the city of São Paulo in Brazil, and she describes the game for him, step by step, kick by kick. Their story went viral.

On the website of the International Football Federation (FIFA), Sílvia described what she does:

“I go into details about the atmosphere, and the characteristics of each player. Narrating the goals is, beyond a doubt, the most exciting part.”

After his story came to light, Nickollas became the darling of the Palmeiras’ fanbase, and was able to meet the players of his favorite team. The athletes and a former coach of the team were touched by the boy’s dedication to the team, and by his mother’s commitment, effort, and affection. Nickollas appeared next to a variety of famous athletes on social networks.

Nickollas, who is 11 years old, is Sílvia’s son by adoption (she also has a daughter). He was born prematurely, at just 5 months, weighing just 1.1 lb and fighting to survive. He was in the hospital for 4 months. Because of his early birth, his retinas didn’t form properly, so he was totally blind. Twelve couples who were waiting to adopt passed him up, but not Sílvia. “I know why [they didn’t take him]: he was reserved for me. He had to be my son,” she said proudly to a reporter for Brazilian media outlet Globo.

Nomination for the FIFA award

Nickollas and his mother were nominated to receive “The Best FIFA Football Awards™” 2019 “FIFA Fan Award.” It’s one of the best-known honors in the worldwide soccer community. This prize is awarded based on a popular vote, which takes place on the internet, and the prize will be awarded on September 23, in Milan, Italy.

If you’d like to vote for this story of love for the family and for sports, you can click here.

Read more:
Classmates of an autistic boy amaze everyone at his graduation