A holy time-saver: This saint recruited his donkey to help him multiply his hours and energy 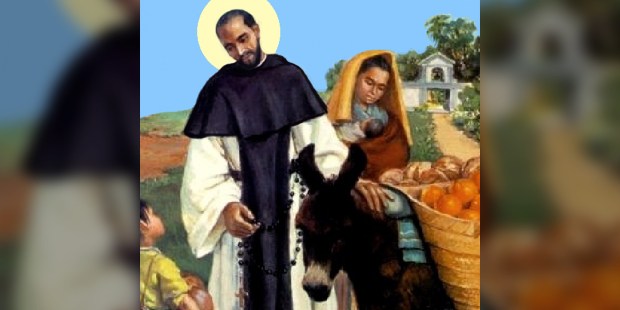 St. John Macias will go straight to your heart with the story of how he got a little miracle for a small girl with a big wish.

Juan de Arcas y Sanchez was born on March 2, 1585, in the Palencia Diocese located in the northwest part of Spain. His mom and dad were poor peasant farmers who worked hard to take care of their children. Sadly, both of them died when Juan and his sister were both very young. The two of them were taken in by their uncle whose last name was Macias. The children took the name as their own. Juan’s uncle trained him as a shepherd, and the youngster would spend many of the long, tedious hours praying the Rosary.

When Juan was a teenager, he attended Mass in a nearby village. The Mass was offered by a Dominican, and his preaching touched young Juan deeply. He started to think about joining the Order of Preachers, and began praying hard for the wisdom to understand and accept God’s will for his life. He wrote that he was visited often by the Blessed Virgin, as well as his patron, St. John the Evangelist. In one of these visions, he reportedly was invited to travel to Peru.

At the age of 25, Juan began working for a man who had business interests in South America. Some years later, he was asked if he would like to go there. Remembering his vision, Juan immediately accepted the offer. It was 1619 when he set out for the Americas. He was 34 years old.

Juan traveled with soldiers, missionaries, merchants, adventurers, and those in poverty hoping to find a second chance. Among those on board, he was considered among those in poverty. The ship sailed for several months before finally stopping in the place of his vision, Lima, Peru. He would remain here for the rest of his life.

Never losing his desire to be a Dominican, Juan entered the Dominican convent of St. Mary Magdalene in Lima in the year 1622. He began as a lay brother who would not preach but would do the necessary manual labor required in the monastery. He became the doorkeeper, and one of his primary duties was to take care of the poor and needy who came to the door seeking material or spiritual assistance.

It is documented that Juan would greet more than 200 people a day. He was always cheerful and upbeat and tried to encourage all who came. His ability to help so many every day came to be recognized as miraculous. Legend has it that one reason he had such time and energy to care for so many was because a certain creature multiplied his efforts. He had a donkey that he would send out to collect food. He hung a sign on the donkey, and the animal knew what route to take.

Every day the donkey would walk through the neighboring town collecting food for Friar Juan to give to the poor. In fact, the donkey knew what homes to “hee-haw” in front of, so the people would know he was there. He always came back with his carry-bags filled, and all the people who had come for food were able to be helped.

While in the monastery, Juan’s life was filled with fervent prayer, frequent penance, and charity. Like St. Dominic, his holy founder, he learned his theology not merely from books but by continually devoting himself to studying what is known as the “Book of Charity,” the Cross. He prayed the Rosary constantly and it is said that his prayers freed over a million souls from Purgatory.

He became best friends with another great Dominican, St. Martin de Porres. The two men would often meet as they made their daily rounds of Lima and were a steady and constant source of encouragement for each other. They were both beatified on the same day in a single ceremony by Pope Gregory XVI in 1837.

Read more:
St. Martin de Porres: This reconstruction of his face reveals his humility and charity

Our story finishes with one last miracle from the life of Juan Macias. A little girl was the last one in line. When she reached Friar Juan, he asked what she needed, and she told him a new dress. Juan had nothing like that to give, but he asked the child to walk with him so they might check the storeroom. The entire way there, Juan prayed for a miracle. When they got to the storeroom on the bench near the door was a package neatly wrapped. Juan opened it and inside was a brand new dress in the exact color and size the girl had hoped for.

John (Juan) Macias was canonized a saint by Pope St. Paul VI in 1975. His feast is celebrated on September 18.

Read more:
Change your perspective on struggles with these words from Rose of Lima