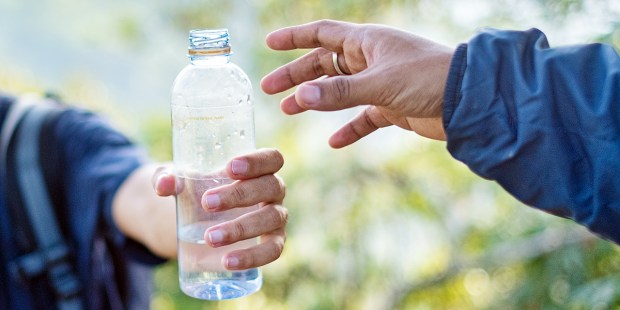 The unnamed man wants no credit for his generosity, just glory for God.

The true beauty of giving is when we don’t expect anything in return. Over the last seven years this has been demonstrated so beautifully by a Wichita man, whose generosity only came to light in a recent Facebook post that highlighted his good work.

The unknown man has been offering iced water during the summer months and warm soup in the colder months over the years in order to praise God. In a report by Lily Wu for Kake.com, Chau Nguyen, the landlord of the kind donor, shared that his tenant is very poor himself and gives what he can. According to Nguyen the reason the man carries out such a kind act is that “he wants to pay back. He want to help others and that’s what God tell[s] him to do.”

One neighbor, Diana Fraye, has been passing by the sign offering the beverages to those in need for years. She finally stopped by with a bunch of flowers for the anonymous man as her way of saying thank you. But when she gave him the flowers the man kindly refused: “He was very kind and accepting, but he didn’t want the gift. He asked me to take it to another neighbor of his. I thought that was even more incredible of him,” she shared.

The story was picked up by Lily Wu on Facebook, who posted that the man’s only request was “Just give Him all the glory.” And in a picture of the drink stop there’s a little message the generous man wants to share from Psalm 34:8 “Oh, taste and see that the Lord is good; blessed is the man who trusts in Him.”