How a small celebration of the patron saint of Naples is now New York’s Largest festival.

Anyone who lives in the tri-state area knows about the Feast of San Gennaro in New York’s Little Italy. In fact, pretty much anyone around the globe who loves New York knows about this gargantuan festival that’s become as much a part of the City as Times Square or the Empire State Building.

Every year over 1 million people descend on Mulberry Street to join in the celebration, partaking of the literally tons of sausage and peppers, cannolis and sugar-topped zeppolis while lazily waltzing through the 11-block section of Little Italy and being serenaded by the sounds of Italian folk songs and children’s laughter. If there’s one hallmark of the festival it’s this: pure joy. 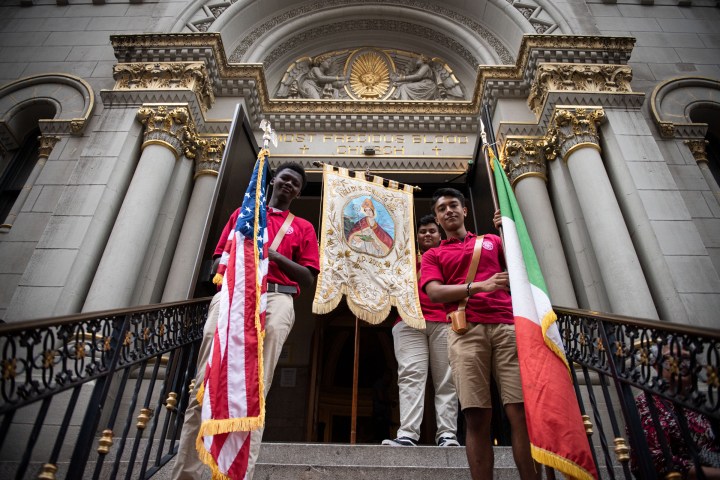 It began a few years prior to the Great Depression in 1926, when a small group of immigrants from Naples erected a small shrine on Mulberry Street to commemorate the saint’s feast day on September 19. Local merchants would bring out food to share with their neighbors, and before long the tradition was born. From a gathering around an 11-foot wide shrine then … to something resembling a block party … to an event that now shuts down almost the entire length of Mulberry Street and dozens of surrounding blocks!

The saint that we have to thank for this massive celebration is San Gennaro, known to English speakers as St. Januarius, the bishop of Naples in the 3rd century. Tradition holds that he was a great defender of his people, and during brutal persecutions carried out by the Romans under Diocletian he went to great lengths to hide and protect them, which led to his own capture and beheading. At the time of his martyrdom a devout woman named Eusebia collected a quantity of his blood, which to this very day miraculously liquefies on his feast day and during certain other holy occasions.

San Gennaro’s heroic act to protect his flock to the point of laying his life down for them has elevated him from bishop to the most beloved patron saint of Naples, and continued devotion through commemorations around the world makes this abundantly clear.

The festivities run from September 12 through September 22, with the high point of the festival being High Mass at the Shrine of the Most Precious Blood on the evening of actual feast day of San Gennaro, September 19, followed by a candlelight procession through the neighborhood.

If you haven’t been to the celebration in New York’s Little Italy, you owe it to yourself to experience the incredible cultural richness and the never-ending culinary delights that put the festive back in festival.

While San Gennaro may be the patron saint of Naples, he’s earned his place among the honorary saints of New York, all of whom have contributed either directly or indirectly in the great Catholic culture that formed the city’s identity.

San Gennaro, brave servant of Christ, please pray for us.