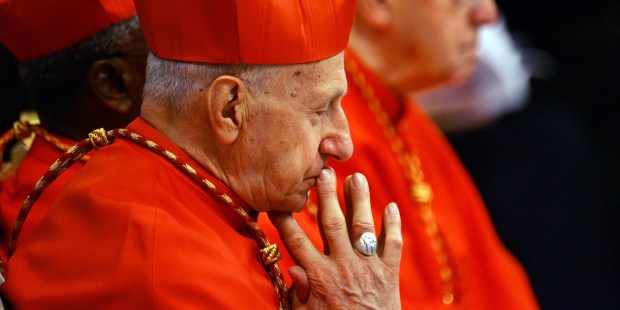 This is much more than a charming story, for upon John Paul’s reverence for Henri de Lubac hangs a very interesting tale of continuing relevance to our time.

Last week, Cardinal Roger Etchegaray passed away. Perhaps his was not a household name, but this very decent man made a substantive contribution to the life of the Church, serving in a number of different capacities over the years and collaborating closely with Pope St. John Paul II.

I had the privilege of meeting him in the mid 1990s when he visited Mundelein Seminary, where I was serving as professor of theology. The Cardinal wanted to address the community, but his English was a bit shaky, so I translated for him. But I recall that his smile and evident joy in the Lord needed no translation whatsoever.

The first time I ever laid eyes on Roger Etchegaray was some years before that, on an extraordinary day in Notre-Dame Cathedral in Paris: the funeral of the legendary theologian Henri de Lubac. A third-year doctoral student at the time, I had made my way to Notre-Dame, hoping against hope that I might be able to participate in the funeral Mass. As I approached the door, I was stopped by a security agent who asked, “Est-ce que vous êtes membre de la famille? (Are you a member of the family?)” “Non,” I responded. Then he inquired, “Est-ce que vous êtes theologien? (Are you a theologian?)” With some trepidation, I said, “Oui,” and he promptly directed me to a prime position near the front of the cathedral. To the tolling of the deepest bells in the cathedral, the simple wooden coffin of de Lubac was wheeled down the middle aisle. I noticed, as it passed by my position, that it was topped by de Lubac’s red cardinal’s biretta.

At the close of the Mass, Cardinal Etchegaray rose to speak on behalf of the pope. He read a beautiful tribute from John Paul II, and then he shared the following anecdote. Soon after his election to the papacy, John Paul came to Paris for a pastoral visit. He made a special stop at the Institut Catholique de Paris to meet with theologians and other Catholic academics. After his formal remarks, Etchegaray continued, John Paul II looked up and said, “Où est le pere de Lubac? (Where is Fr. de Lubac?)” The young Karol Wojtyla had worked closely with de Lubac during Vatican II, specifically in the composition of the great conciliar document Gaudium et Spes. De Lubac stepped forward and, Etchegaray told us, Pope John Paul bowed his head to the distinguished theologian. Then, turning to the coffin, Etchegaray said, “Encore une fois, au nom du pape, j’incline la tête devant le pere de Lubac (Once more, in the name of the Pope, I bow my head before Fr. de Lubac).”

This is much more than a charming story, for upon John Paul’s reverence for Henri de Lubac hangs a very interesting tale of continuing relevance to our time. De Lubac was the most prominent proponent of what came to be called la nouvelle theologie (the new theology). Departing from the strict and rather rationalist Thomism that dominated Catholic intellectual life in the first half of the 20th century, de Lubac and his colleagues turned with enthusiasm to the Scriptures and to the marvelous and multifaceted works of the Church Fathers.

This return to the “sources” of the faith produced a theology that was spiritually informed, ecumenically generous, and intellectually rich—and it got de Lubac in considerable hot water with the academic and ecclesial establishment of that time. At the very height of his powers, throughout the 1950s, he was silenced, prohibited from teaching, speaking, or publishing. Rehabilitated by Pope John XXIII, de Lubac played a pivotal role at Vatican II, decisively influencing many of its major documents. It is altogether correct to say that this champion of the reforming Second Vatican Council was no friend of pre-conciliar Catholic conservatism.

Read more:
A baseball-playing kid from Iowa who became a missionary bishop at Vatican II

However, in the years immediately following the Council, Henri de Lubac became impatient with the Catholic liberalism, led by such figures as Hans Küng, Karl Rahner, and Edward Schillebeeckx, which was pushing past the texts of Vatican II, accommodating itself far too readily with the environing culture, and losing its mooring in classical Christianity. And so, along with his colleagues Hans Urs von Balthasar and Joseph Ratzinger, he founded the theological journal Communio, which was meant as a counterweight to the journal Concilium, which published the works of the leading liberals.

It was this Communio school, this middle path between both a conservative and liberal rejection of Vatican II, that John Paul II enthusiastically embraced. If you seek clear evidence that the Polish Pope favored this approach, look no further than the Catechism of 1992, which is filled with the spirit of the nouvelle theologie, and to the fact that John Paul specially honored the three founders of Communio, making Joseph Ratzinger head of the Congregation for the Doctrine of the Faith, and naming both de Lubac and Balthasar Cardinals.

Are both left-wing and right-wing rejections of Vatican II on display today? Just go on the Catholic new media space and you’ll find the question readily answered. What is still very much the needful thing is the de Lubac attitude: deep commitment to the texts of Vatican II, openness to ecumenical conversation, a willingness to dialogue with the culture (without caving in to it), reverence for the tradition without a stifling traditionalism.

Perhaps I might invite you to muse on that gesture and those words of Cardinal Etchegaray that I took in many years ago: “Once more, in the name of the Pope, I bow my head before Fr. de Lubac.”