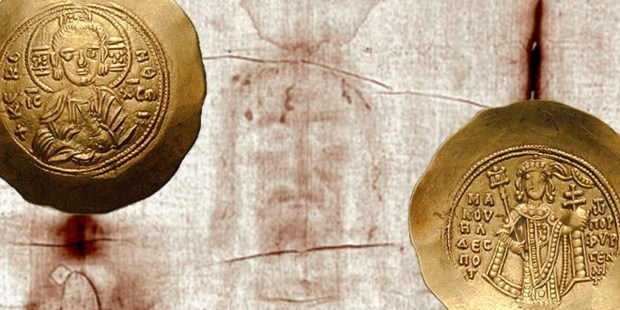 Italian researchers suggest the fought-over relic was in the Byzantine Empire as early as the 600s.

A longstanding debate over the authenticity of the Shroud of Turin is hung up over radiocarbon-dating, which places its origins in the 14th century. But if the speculations of two investigators are proven, it could be a golden moment in the history of Shroud research.

The Shroud, which many people believe is the burial cloth that was wrapped around the body of Jesus Christ after the crucifixion, has been studied and argued over in many different ways. Some scholars point out that the medieval mending of the cloth is what gives us the 14th-century dating.

Now, two Italian researchers have compared gold particles that have been found on the Shroud to Byzantine coins minted between the 7th and 12th centuries. They claim this is evidence that the Shroud was displayed in the Byzantine capital, Constantinople, some time before it was sacked by Crusaders in 1204.

Giulio Fantia and Claudio Furlan of the University of Padua say they tested micro-particles of gold that had been vacuumed from the Shroud. They compared them to the gold found in a set of 32 coins minted in the Byzantine Empire, Medievalists.net reported.

Interestingly, Fantia and Fulan found that nine of the fragments had electrum, an alloy of gold and silver with trace amounts of copper that was used in the Byzantine Empire during the 11th and 12th centuries.

Fantia and Fulan believe that the Shroud would have been displayed and stored with items made of gold, “or even that people could have rubbed actual coins onto cloth, leaving behind the gold dust,” Medievalists.net says.

There is even a contemporary testimony of an image in Constantinople that Fantia and Fulan now believe could have been the Shroud of Turin. It is from Robert de Clari, a crusader knight, who wrote that “there was a church called St. Mary of the Blachernae, where the Shroud (Sydoines) was kept in which Our Lord was wrapped. Every Friday it was elevated all straight, so that it was possible to easily see the image of Our Lord.”

“The cloth could have then been taken back to Europe as war booty, or was sent to the French king Louis IX in 1238 by the Latin Emperor of Constantinople along with other Christian relics,” the website says.

“The composition of gold alloy micro-particles vacuumed at various times from the Turin Shroud are compared with that of gold Byzantine coins minted during the VII–XIII century,” according to an abstract from Fantia and Fulan’s paper, at Science Direct. “The weight percentages of the micro-particles are determined via Energy Dispersive X-rayFluorescence analysis. The results are arranged in groups to show the similarity in composition between the micro-particles and coins. This process indicated a connection between the micro-particles and the Byzantine coins. In particular, many samples of gold-silver alloy possibly containing copper residual similar to the famous Byzantine Electrum have been detected. It is well known that the Electrum gold-silver alloy is not frequent in the gold coinage of ancient time. The presence of this alloy can be considered typical of the Byzantine Empire, if we exclude the Lydian coins of 6th century B.C. and few other rare cases not applicable for possible correlation with the Shroud. Evaluation of these results, therefore, is compatible with the Shroud’s presence in the Byzantine Empire in the period up to 1204 A.D., as many historical clues indicate.”