The curious connection between the job of doorkeeper and canonization 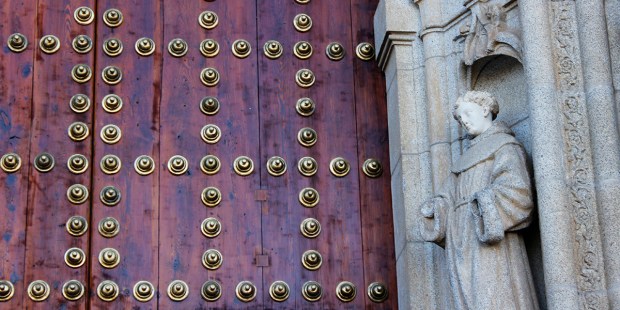 There are many saints in the Catholic Church who found holiness in being a humble porter.

In many religious communities it is common for a monk or nun to be assigned the task of porter. While greeting visitors at the door might not seem like a noble task, for a monastery it is the porter who stands as a representative of the religious community.

St. Benedict gave specific instructions in his Rule on who to select as the porter and the particular spirituality they must have.

At the gate of the monastery let there be placed a wise old woman, who knows how to receive and to give a message, and whose maturity will prevent her from straying about. This porter should have a room near the gate, so that those who come may always find someone at hand to attend to their business. And as soon as anyone knocks or a poor person hails her, let her answer “Thanks be to God” or “A blessing!” Then let her attend to them promptly, with all the meekness inspired by the fear of God and with the warmth of charity.

In other words, the office of porter is not given to just any monk or nun, but to a person already excelling in virtue. Yet, it appears that this task facilitates a quick ascent up the ladder of holiness.

The list grows long of those who were porters and are now recognized as saints: Paschal Baylon, Charles of Sezze, Didacus of Alcalá, Felix of Cantalice, Alphonsus Rodriguez, André Bessette, John Macias, Benito Solana Ruiz, Bonaventure of Barcelona and Solanus Casey. This is only a short list and could grow even longer if every saint-porter were named.

Bl. Solanus Casey is one of the most well-known porters in the modern era, whose simplicity attracted people from all over the United States. According to the Detroit Catholic, “While waiting to meet with other priests in the reception area, people shared their problems and sufferings with Fr. Solanus. He would listen and maybe ask a few questions, then pray with them. He might lay his hands upon them to bless them, use holy water, read prayers from a prayer book or a Scripture passage or give them second-class relics from a canonized saint.”

It was through these encounters that many miracles took place, and at the time of his funeral, an estimated 20,000 people filed past his coffin. Even though he was assigned one of the most mundane tasks of the monastery, he was able to perform it so well that people were drawn to his holiness.

Similarly, St. André Bessette was another popular doorkeeper who sat with people, heard their many sufferings and prayed with them. Afterwards many were healed of their ailments, either physical or spiritual.

None of these saintly porters sought any fame or notoriety. They were simply fulfilling their task of opening the door and welcoming the visitors as if they were Jesus Christ. In a certain sense the task of porter is one of the most difficult in the monastery, as a monk typically enters religious life to get away from the world, yet a porter is constantly interrupted by the world.

A good doorkeeper not only needs to be a saint, but will become one if he/she recognizes the next visitor as “a blessing” and treats them as if they were Jesus Christ in the flesh.

Read more:
St. André Bessette cured over 10,000 people in his lifetime, according to estimates