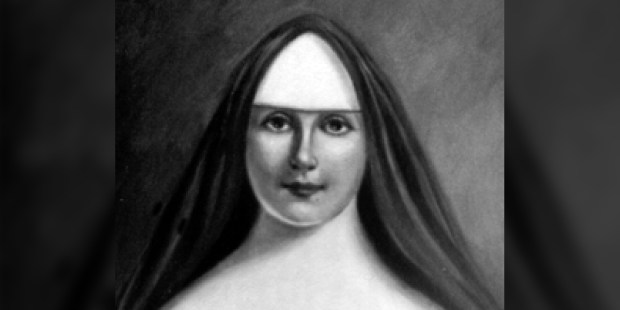 Fanny Allen laughed through her baptism — and got scolded for it — and had a vision of St. Joseph. What a story!

Frances “Fanny” Allen grew up in a Vermont household that had nothing but contempt for the Catholic religion. However, a mysterious incident in her youth later inspired her to become the first nun who was a native New Englander.

Allen, the daughter of the revered Revolutionary War General Ethan Allen, was born in Sunderland, Vermont, on November 13, 1784. When she was age 2, her family relocated to Burlington, Vermont. Two years later, her father died. Never could he have imagined his daughter’s eventual vocation.

Indeed, the New England Historical Society remarks that it was “probably a good thing that Ethan Allen died before his daughter Fanny converted to Catholicism and became a nun.”

Aside from being a military man, Ethan Allen was a staunch rationalist philosopher who authored a book, Reason, The Only Oracle of Man, that was firmly against organized religion.

Fanny Allen’s widowed mother later remarried. Though the young girl’s stepfather was not quite as anti-religious as her biological father, neither man had much use for church, and no use at all for a Roman Catholic church.

The Allen family moved to the village of Westminster, Vermont, where Fanny Allen lived from age 5 until age 17. It was in this village where the following apparition took place when she was 12 years old.

Walking along the banks of a river, she saw a monstrous-looking animal heading in her direction. She was paralyzed with fear until another unexpected appearance – that of a man “wearing a brown cloak and carrying a staff in his hand,” who snapped her out of her fear-induced paralysis by gently touching her arm and telling her to “hasten away.” After heeding his advice, she turned around to have a look – but neither man nor beast were in view.

For a long time after this incident, whenever there was a considerable crowd of people, Allen would search the area, hoping to recognize the man who had helped her. Each time, this endeavor proved unsuccessful. Years later, she encountered a painting of the Holy Family and finally recognized her benefactor as St. Joseph.

As a young woman, Allen – then living in the town of Swanton, Vermont – obtained the support of her family to study in Montreal. Her stated reason was that she wanted to learn the French language. That indeed was true, but she also had become intrigued by Catholicism (a religion that had an established presence in Quebec).

By her own admission, she was at this point in her life an “infidel” who “had heard nothing but evil spoken of the Catholic Church.” In fact, before she headed to Montreal to study at the Congregation of Notre Dame, her family requested that she receive baptism into the Anglican faith. Unable to take the ceremony seriously, she was scolded by the minister for laughing.

Allen, however, began taking religion with greater thoughtfulness in Montreal. There, in 1807, she converted to Catholicism. Soon after receiving her First Holy Communion, she decided to become a nun.

Her friends and relatives were appalled at this decision. They coaxed her back to Vermont for one year, during which time people subjected her to a succession of elaborate parties and attractive male suitors in an effort to dissuade her from the convent life.

Undeterred, Allen returned to Montreal, where she started her novitiate on September 29, 1808. And on May 18, 1811, she became a nun in the order of the Religious Hospitallers of Saint Joseph.

As a nun, Allen spent much of her time working in the pharmacy of the Hôtel-Dieu [which translates to “Hotel of God”], Montreal’s oldest hospital. She also served as an interpreter for English-speaking patients.

Allen herself would become a patient, owing to tubercular consumption, a condition that claimed her life on September 10, 1819, at age 34. Her remains were buried beneath the Hôtel-Dieu in Montreal.

In 1894, five Sisters from her order in Montreal established a hospital in Allen’s name in her home state of Vermont. This hospital has since become a part of the University of Vermont Medical Center.

This month marks 200 years since the death of this convert, nun, and maverick soul. Indeed, it required not only a saintly encounter but also a strong will to make a nun of a woman whose “origin, education, and environment were calculated to make her the least likely woman in the United States to take such a step.”