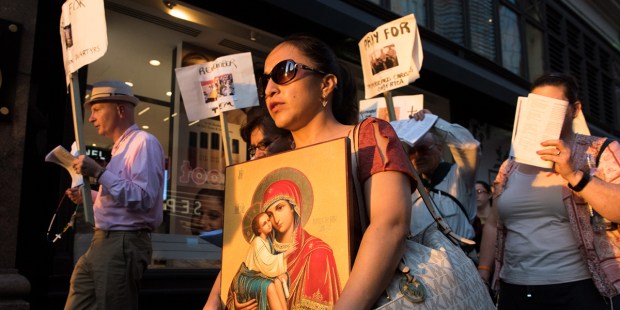 Called attacks on religious communities “a wound on all humanity”

President Donald Trump addressed the United Nations General Assembly on the issue of religious freedom, calling on global leaders to ”end religious persecution” around the world.

In his address Monday, Trump said that “approximately 80 percent of the world’s population live in countries where religious liberty is threatened, restricted or even banned.”

“As we speak Jews, Christians, Muslims, Buddhists, Hindus, Sikhs, Yazidis and many other people of faith are being jailed, sanctioned, tortured and even murdered, often at the hands of heir own government, simply for expressing their deeply held religious beliefs,” Trump said.

Calling the protection of religious freedom on of his administration’s “highest priorities,” Trump said that almost 250 million Christians suffer from religious persecution and that “11 Christians are killed every day for following the teachings of Christ.”

He listed recent acts of violence against people of faith in places of worship, including the attack on Fr. Jacques Hamel in Normandy, France, the anti-semitic attacks in Pennsylvania and California, the murder of Muslims in New Zealand and the terrorist bombings of churches in Sri Lanka.

“These evil attacks are a wound on all humanity, we must work together to protect communities of every faith,” he said, and called on “every nation to increase prosecution and punishment of crimes against religious communities. There can be no greater crime than that.”

He concluded his speech with the announcement of a $25 million initiative to protect religious freedom, religious sites and religious relics, and a coalition of business to protect people of faith in the work place.

“Too often people in positions of power preach diversity, while silencing, shunning or censoring the faithful,” he said. ““True tolerance means respecting the right of all people to express their deeply help religious belief.