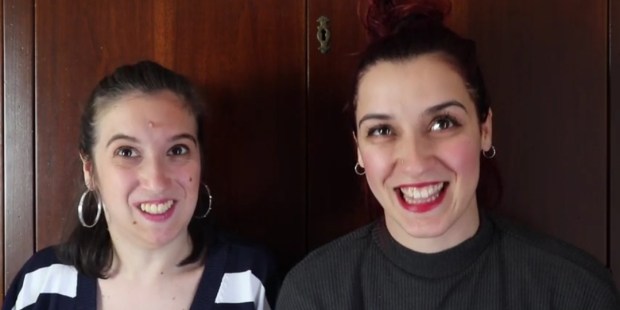 She couldn’t even stand on her own, but then she started to dance.

Whether or not you wish on a star, some dreams really do come true! Such was the case for Virginia Di Carlo, who this past September 17 opened a dance school. That might not sound so unusual, but let’s start at the beginning.

An article by Maurizio Crosetti in the Italian paper Repubblica in November 2016 tells the story of Virginia, a young woman born with spastic quadriplegia because of complications during childbirth. Due to brain damage, she was born unable to move properly or walk, much less dance. Virginia explained her situation to Crosetti: “They told my mother that, if I did well, I might make it to the age of 18, and instead, look at me now …” Today, Virginia is 26 years old, and has completed college.

Indeed, Virginia and her parents weren’t resigned to a life of limitations, despite the low expectations of the doctors.

“Ever since I was small, my dad would carry me to the playground and help me walk on the slide,” she told the reporter from Repubblica. Then, at the age of 11, Virginia began to ask her mother to sign her up for dance classes. Initially, her mother didn’t give in to her request, because she was afraid it might not be a good experience for her daughter. Virginia persisted, though, so one day her mother took her to dance classes together with her sister and brother.

Virginia described that day to the reporter for Repubblica. “I was 11 years old, and I asked my mother to take me with my sister Martina and my brother Michele to dance school, but she didn’t want to: she was afraid I’d be discouraged. But I’m very hard-headed … I went to that lesson with my brother and sister, and as I listened to that Caribbean music, I began to move. The dance teacher, Daria Mingarelli, saw what I was doing and asked me if I wanted to try dancing.” Virginia said yes, and began to try her first dance steps. Virginia told Reppublica, “Before starting to dance, I couldn’t even stand on my own two feet by myself; I always had to lean on someone … I call it the miracle of beginning to walk by dancing.”

Dancing before walking: who would have expected it! We never know what surprises life has in store for us. Through this experience, Virginia discovered her passion and began to follow her dream. With the help of enthusiastic and talented teachers, supported by the love of her sister Martina and her entire family, Virginia became a dance teacher, courageously and tenaciously facing many difficulties. What grit!

Virginia didn’t rest on her laurels when she reached any of the small or great goals she had set for herself. Rather, she began to get the idea for a new project: opening a dance school for people with disabilities. At the time of the interview in 2016, she was already teaching dance to children with disabilities, and already had thought of the name of her future school: Special Angels.

Today, three years later, she has just inaugurated her dance school where she will teach together with her sister. “This will be a dream come true,” she told Lorenza Castagneri of Italian news outlet Corriere della Sera.

Dance, which is her passion, isn’t just what she loves to do: it’s her profession. Special Angels Dance School, where she and Martina teach, is open to everyone: children, young people, and adults, with or without disabilities.

Various civil authorities participated in the inauguration, including the regional and municipal political leaders and the president of the Italian Olympic Committee, Giovanni Malagò. Speaking to ItalpressNews, he said, “Let’s see if there’s anything I can do to support the school in more than the institutional aspects, because all of these people deserve it.”

Virginia’s mother, Rossella Renda, is proud of her daughter who has overcome so many obstacles and has managed to make her dream come true. “For my daughter, this is a triumph, after so many difficulties at school and so many rejections when she was looking for work,” she told Castagneri.

The “Adopt a Dancer” project

Virginia and Martina’s passion, generosity, and desire to help have given life to a beautiful initiative, “Adopt a Dancer”—which doesn’t mean taking a dancer into your house, as Virginia jokingly says in a video presenting the project, but helping raise funds to allow children and young people with disabilities or with financial difficulties to attend dance classes, to grow, and to have fun.

When Virginia thinks of happiness, she imagines being married with children, and she hopes to be an inspiration for her students at the school, as her own teachers were for her. We can’t help but note the beauty, love, and gratitude present in these aspirations. Congratulations, Virginia, on making your dreams come true! May your determination, joy, and enthusiasm inspire many more people, at your school and around the world.

Read more:
Cerebral palsy hasn’t stopped this guy from his dream job at a baseball stadium