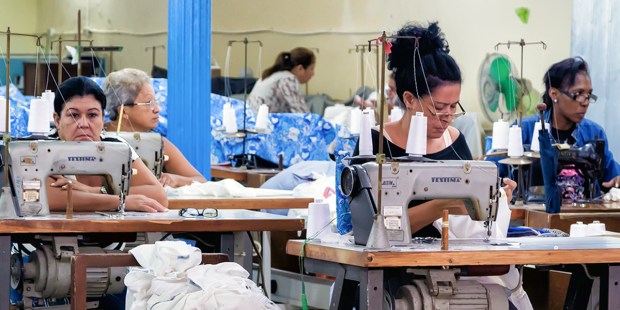 When the people who make your clothes can barely feed their kids, what can American shoppers do to help?

It’s a good thing for parents like Sandra Romero that clothing prices have remained pretty stable. She and her husband have to buy new clothes at the beginning of every school year for their daughter, who is regularly outgrowing last year’s threads.

While food prices in the United States have gone up 50% since 1991, the cost of clothing has changed little.

And it’s no wonder, as most clothing manufacturing has gone overseas, where labor costs are far lower.

But while that’s a benefit for Americans, reports that have made their way out of factories in China, India, Indonesia and other countries strongly suggest that far too many garment workers are paid wages they can barely live on, must put in excessive work hours in unsafe working conditions, and often endure verbal, physical, and sexual abuse.

Wages for workers in overseas factories have also inched up, according to reports. And progress to ensure living wages for such workers also seems to have merely inched along. In many cases, the wages have been insufficient to ensure that a worker’s family is well-fed and decently housed. A large majority of garment workers are women, and in some cases, the need for better pay has combined in tragic ways with factory managers’ unscrupulous demands for sexual favors.

“We’re in touch with the trade unions here in [Lesotho] because we’ve also tried to do a fair amount of HIV education and life skills training with young women in the factories,” said Erica Dahl-Bredine, Catholic Relief Services’ country representative of Lesotho and Mozambique. “And they all tell us that sexual harassment is very widespread in the factories, that women more often than not are encouraged, if not seemingly forced, to have sexual relations or provide sexual favors to supervisors to get overtime, which many of them need because the pay just isn’t enough to get by on, to be promoted, even to actually get a chance at a job, when there are always more women looking for work than there are jobs. That’s a very serious concern that’s really not being addressed in the country in any meaningful way.”

Working conditions are also a problem, and in some cases have led to death. A 2012 factory fire in Karachi, Pakistan, claimed some 300 lives. Many of the exits were locked or blocked. A building collapse in Bangladesh that killed 1,134 workers in 2013 did not come as a complete surprise, as some workers had complained that the structure was unstable—but their voices were ignored.

Romero said she has read articles about garment workers’ poor working conditions and low wages. But she said she hasn’t had an opportunity to find out which brands might be doing something about it.

Indeed, the global garment industry is very complex, and it is sometimes difficult even for brands to monitor the clothing factories with which they contract. Some brands have made efforts to ensure better pay and working conditions at the factories, however, thanks in part to pressure from advocacy groups.

The Clean Clothes Campaign, an alliance of labor unions and non-governmental organizations based in Amsterdam, earlier this year asked 20 clothing brands to provide evidence that they are ensuring a living wage for workers in overseas factories. The results were disappointing.

“No brand can report that the workers who make their clothes earn a living wage, outside those in their own headquarter countries,” the CCC contends.

Only Gucci got anything other than a failing grade: it was determined that 25% of the Italian fashion company’s workers earn a living wage.

Four of the 20 companies featured in the CCC’s Tailored Wages report responded to Aleteia’s request for comment or further explanation. Here is a brief summary:

Adidas. The German sporting goods company says it strives to “ensure that prices they pay to suppliers cover legally mandated minimum wages and benefits.” But the CCC points out that there is a difference between minimum wage and a living wage and says it found no evidence of work to bridge the gap between the two.

Stefan Pursche, a spokesman, told Aleteia that the Adidas workplace standards “require our suppliers to progressively raise employee living standards through improved wage systems, benefits, welfare programs and other services. In addition, we are active in numerous organizations and initiatives that support these efforts.”