Caterina’s joy was to say “yes” to life 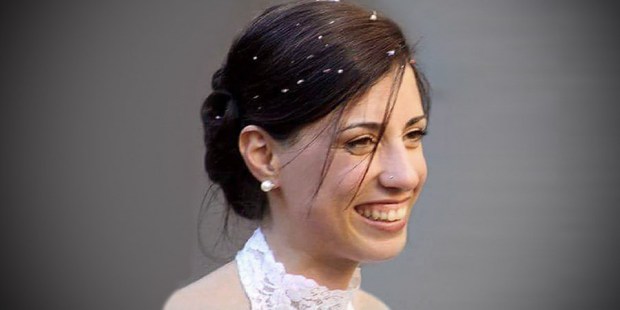 Certain lives illuminate the darkness in which we walk.

Caterina Morelli, 37 years old, joined the youth group affiliated with the Communion and Liberation movement when she was young, and continued to participate in the movement throughout college in Florence, where she graduated with a degree in medicine and surgery.

On June 16, 2012, she married Jonata, with whom she already had a first child, Gaia; about 10 days later, they discovered they were expecting a second child. Just four hours after that, they received the results of the biopsy of a lump in Caterina’s breast: it was a tumor of a very aggressive kind. In Florence, they suggested she have an abortion to be able to begin with chemotherapy and radiotherapy.

Caterina rejected this proposal, and instead — thanks to the doctors of a Communion and Liberation group for adults in Milan — she discovered another path, one that was more difficult and riskier but compatible with the life she was carrying in her womb.

She submitted her body to the treatments and to a first operation in Milan. In February of 2013, Giacomo was born, and Caterina immediately began a more intense cycle of chemotherapy and new operations to remove cancer cells from her body. That same year, she began a specialization in pediatric surgery.

After a period of tranquility, in 2015 the cancer reappeared, having metastasized to her liver, lungs, and bones, to the point where it was impossible to continue on the path of surgery, so she underwent innumerable and taxing cycles of chemotherapy. This did not impede her and her husband from organizing various trips to Lourdes and Medjugorje to pray for her health, and for the health of all those in need.

Thus began a period involving many sick people and their families who were on the path of suffering, and it became a sign of how to face sickness: entrusting herself completely and joyfully to the Virgin Mary. The same happened with other friends within the Communion and Liberation community, who gathered around her more and more.

This began a form of total communication about how she was living this experience, using the modern instrument of WhatsApp chat groups, which became more numerous. In the meantime, her story began to spread throughout the entire local church in Florence and beyond. She and her husband would meet various homeless people and people without jobs, and invite them to their home for a meal. Others whom they met who had lost their faith, upon beginning to have a relationship with Caterina and her husband, returned to prayer and to the Church.

In September of 2018 a new and final degeneration of her condition began, with metastasis in her brain. While she was still conscious, they moved forward the date of their daughter’s First Communion, which was celebrated in a joyful atmosphere on January 26, 2019. Immediately afterwards, her last days began. Their house was a destination for continuous pilgrimages by many people. Various priests took turns celebrating Mass at their house each day. On February 7, Caterina fell into a coma, and throughout the night, friends and family gathered around her bed to pray and sing, together with her children, in an atmosphere of celebration, as she had desired.

She died in the first hours of February 8. Her funeral was celebrated in the Basilica of the Most Holy Annunciation, at the express invitation and desire of the Friars who, when they visited her house, had said, “Here, there’s truly a corner of paradise on Earth.”

Read more:
Interview: The husband of Chiara Corbella on his wife’s sacrifice and possible canonization