In the heart of the French Quarter, the cathedral has a rich history dating back to the 18th century.

While the French Quarter of New Orleans is best known for its decadent Mardi Gras celebrations, its most prominent feature is the iconic St. Louis Cathedral, a majestic triple-spired Catholic church that faces the winding Mississippi River. The cathedral has a rich history and magnificent features, making it a favorite among both local residents and visitors alike. 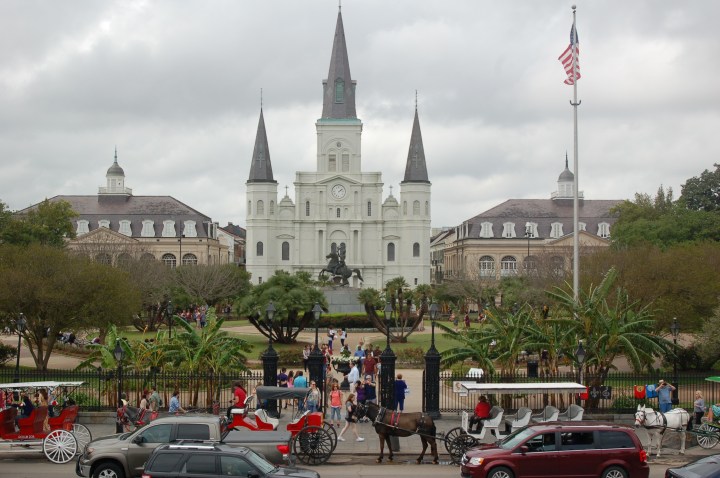 Elements of the current cathedral building date to 1793, the year New Orleans became a diocese, but much of what is seen today is due to an effort to expand the cathedral in 1850 when New Orleans became an archdiocese. While there is no official count of the numbers of visitors it draws annually, volunteer tour guide Brandon Briscoe said it draws a “steady flow” of people, both Catholic and non-Catholic alike.

Briscoe has long had a connection to the cathedral; in 2005, in the aftermath of Hurricane Katrina, New Orleans Archbishop Alfred Hughes sent Briscoe, then an archdiocesan seminarian, and other seminarians to clean up the site and re-open it to the public. He recalled, “As it is on higher ground, it didn’t flood. He wanted it open as a place the first responders could go, as well as because it is an important symbol for the City.”

Briscoe has since led hundreds of tours for thousands of people, including a special one for the King and Queen of Spain. He recently narrated The Church in the Crescent (referring to the bend in the river) for a tricentennial exhibit about the cathedral and 300 years of Catholicism in New Orleans. The exhibit will be open through fall 2020, and is housed in the Old Ursuline Convent Museum located several blocks away from the cathedral.

Briscoe pointed out several features unique to the cathedral that visitors shouldn’t miss. The baptismal font in the front of the church, for example, predates the church itself by several decades and is one of the cathedral’s oldest artifacts. Briscoe noted, “Generation after generation of New Orleans residents have been baptized in it, and it is still in use today.”

He also suggested visitors take note of the cathedral’s many colorful stained glass windows, which depict the life of St. Louis, from birth to death. Louis is patron of the diocese and was a great Christian monarch. It is fitting that the cathedral be named for him, said Briscoe, as he was known for looking out for the poorest and the least in the community.

Other highlights include the cathedra, or bishop’s chair, a symbol of the bishop’s apostolic authority over the archdiocese.

Among those honored with images at the cathedral is Venerable Henriette DeLille (1812-62). This woman of mixed race founded the Sisters of the Holy Family, who ministered to the slaves and free people of color. A prayer room, named in her honor, can be found in the cathedral’s former baptistery. Should DeLille ever be canonized, it will be elevated to chapel status.

A central focus of the cathedral is its ornate high altar. In a painting above it, in French, are the words from Scripture: “This is the lamb of God who takes away the sins of the world,” said by the priest during Mass. To the altar’s right and left are Sts. Peter and Paul, the early pillars of the Church.

The confessionals are also a prominent feature. They are not so because they are history, but because they are used to offer the Sacrament of Penance to many who pass through the church each year. Briscoe said, “The priests hear many beautiful confessions there, sometimes from people who hadn’t been to confession in 30 years. The confessional light reminds those who walk in our doors that Jesus is ready there for a sacramental encounter with them.”

Flags line either side of the cathedral, and include those of neighboring dioceses under the purview of the archdiocese, as well as the many governments that had at different times controlled the City.

Famous visitors to the cathedral have included U.S. Admiral David Farragut, who in the 1800s ordered a cannon salute to the church as he passed by; an errant cannonball struck and caused minor damage to one of the spires. Ask your tour guide to point out the mark. Presbyterian President Andrew Jackson was said to have returned to New Orleans and its cathedral two decades after his lopsided victory at the Battle of New Orleans, admitting that without divine intervention the victory would never have been his. In 1987, Pope John Paul II visited the cathedral and offered an outdoor mass for 200,000.

For centuries, St. Louis Cathedral has endured hurricanes, epidemics, floods and warfare, and remains the most impressive Catholic feature of the City. Docents are on hand weekday mornings to offer impromptu tours, or call the rectory office to arrange a special group tour.