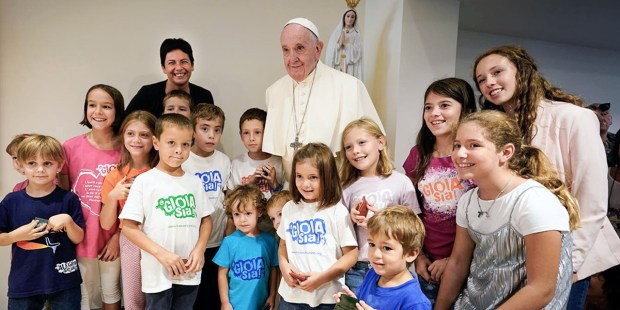 The pope arrived at the New Horizons Catholic rehabilitation center unannounced, in the seat of a blue Ford Focus.

Pope Francis and the legendary opera singer Andrea Bocelli made a surprise visit on Tuesday to the Cittadella Cielo, a shelter for families and young people in need located in the town of Frosinone, in central Italy, according to a Vatican News report.

While very few people knew about the visit ahead of time, word spread quickly on social media, and soon a gathering of passersby had formed at the doors of the shelter to greet the pope, who arrived in a blue Ford Focus.

The shelter, which is part of the international New Horizon network of homes to help those in need, serves mostly young people and “street kids” suffering from drug and gambling addictions, those who have been involved in prostitution, and those who for whatever reason have been cast out from their own families.

Founded in 1994 by Italian journalist Chiara Amirante, the New Horizon communities serve as “factories of love” to those on the peripheries, offering the marginalized a home, tools for reintegrating into society, and spiritual guidance.

The New Horizons project is a favorite of the pontiff, who on June 8, on the occasion of the community’s 25th anniversary, called the center to offer his best wishes and thank the “Piccoli della Gioa,” the consecrated lay people who carry out its mission.

The tenor Andrea Bocelli has been outspoken about his Catholic faith and performed at the Church’s World Meeting of Families held in Dublin, Ireland last year.

Read more:
Andrea Bocelli: “In my case, not having faith would mean living in despair”