Who do you say that I am? The current crisis of belief in the Eucharist 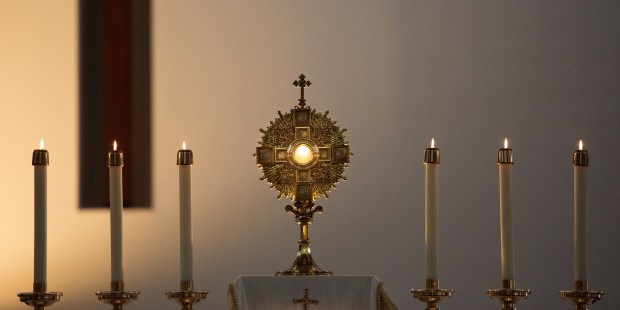 Belief that Jesus is the Second Person of the Trinity—fully human and fully divine—is fundamental to belief in His Eucharistic presence.

In one of her letters, Flannery O’Connor recorded a conversation from a dinner party she attended with a “Big Intellectual,” who was also a former Catholic. When presented with the opinion that the Eucharist was a wonderful and powerful symbol, Flannery “shakily” responded:

The Pew Survey on the belief in the Eucharist

It didn’t take a Pew Research Center survey for many Catholics to notice that there was a crisis in the Church.

Although this is true, the title of the recently published Pew Survey grabbed the attention of Catholics and the Church—especially among those institutions and apologetics outlets that have proliferated since the 1970s—when it declared:

Just one-third of U.S. Catholics agree with their church that Eucharist is body, blood of Christ.

Across all age groups, reactions to this news varied from resigned acceptance to disbelief. Some knowledgeable observers (including Bishop Barron and Father Spitzer) agree on one thing however: the root cause is poor catechesis.

So what does the Church teach about the Eucharist?

In line 1324, the Catechism of the Catholic Church reminds us that the Eucharist “is the source and summit of the Christian life” (for more, see “The Sacrament of the Eucharist” in sections 1212-1419).

In his book, With Us Today: On the Real Presence of Jesus in the Eucharist, Fr. Hardon, SJ, describes the Eucharist as “the deepest mystery of Christianity.” He points out the need to understand this mystery as best we can, so that our faith may keep “growing with increased intelligibility.” Then, after a brief historical review confirming the ancient origins of a continuously held belief in the Real Presence, Fr. Hardon shows how belief in Christ’s Eucharistic presence has been linked to belief in the reality of the Incarnation. He concludes with this remark:

Once we realize who He is on earth—no less than He was in the first century—it is no wonder that those who believe will flock to be in His presence, to honor and thank Him as their God, with weeping emphasis to beg Him for the graces they so desperately need today.

5 Resources on the Eucharist from Father Spitzer

Even from the beginning, each Christian was encouraged “to be ready with a reason for the hope that is in you.” (1 Peter 3:15)

Fr. Spitzer anticipated the need for a cogent, updated catechesis when he founded the Magis Center for Reason and Faith, and more recently the informative and enriching online resource, Credible Catholic.

The following is a selection of available resources that will inform and inspire a great love and appreciation for the gifts given to us through the Eucharistic presence of Jesus.

“The truth does not change according to our ability to stomach it.” -Flannery O’Connor

Although not speaking specifically about the Eucharist, the incisive wit of the Flannery O’Connor quote above stands up to the modern culture’s reaction to many of the teachings of the Church.

It seems an apt reminder as we respond to the current crisis.

It also echoes the response of the crowd to Jesus’ “bread of life” discourse found in John 6: “This saying is hard; who can accept it?”

Remember, the Jews murmured against Him because He said, “I am the bread that came down from heaven.” His next statement caused quarrels to break out among those in the crowd: “[T]he bread that I will give is my flesh for the life of the world.”

The result? “How can this man give us [his] flesh to eat?… [A]nd they walked with Him no more.”

Will you too leave?

Jesus is still asking us this question.

With prayer, help from the Catechism, and resources provided by the Magis Center and Credible Catholic, may each of us respond with confidence and love as Peter did: “Lord, to whom shall we go? You have the words of eternal life.”

“[The Eucharist] is the center of existence for me; all the rest of life is expendable.” -Flannery O’Connor