Is this the best book of Catholic apologetics? 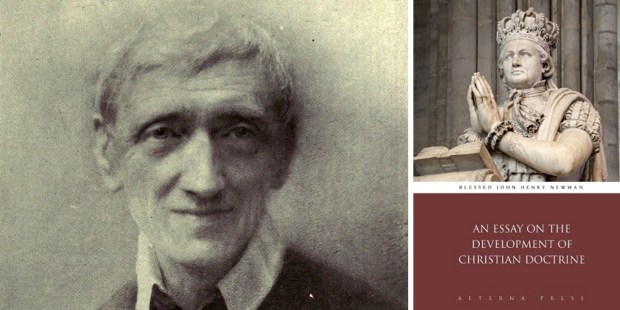 The author is about to be canonized.

“In your opinion, what is the best book of Catholic apologetics?”

Although that question, put to me unexpectedly several years ago by someone I was chatting with, took me by surprise, I didn’t have to spend much time searching for the answer.

“Cardinal Newman’s Essay on the Development of Christian Doctrine,” I said confidently — just as I would do now if someone asked me the same thing.

I remembered this incident recently as I thought about John Henry Newman’s upcoming canonization as a saint, scheduled to take place October 13 in Rome. What is it, I asked myself, that makes this scholarly 19th century British churchman an object of continuing interest to so many people 129 years after his death?

The answer, I believe, is that Newman was and remains first and foremost a great defender of the faith — something we’re much in need of now.

Read more:
What is apologetics in the Catholic Church?

A critic who hadn’t read the book might object that the Essay on Development is a poor example of defending the faith, since in the years following Vatican Council II, “development” has often been used as cover for changing settled doctrine.

But a comment by theologian Father Louis Bouyer, like Newman a convert to Catholicism, deals neatly with that objection. In his foreword to the Ignatius Press volume of Newman’s Parochial and Plain Sermons, he remarks that the Essay is “not in the least an apology of change for the sake of changing but a most careful delineation between change which means real growth and change which is only corruption.”

It’s worth recalling, too, that Newman, an Anglican clergyman at the time, spent much of 1845 writing the Essay on Development. Finishing the project late in the year, he hastened to seek admission to the Catholic communion, having, one might say, written his way into the Church with this book.

In important ways, though, he was Catholic at heart long before that, a circumstance of which ample evidence can be found in the Parochial and Plain Sermons — along with frequent reminders that this gentlemanly scholar could also be stern, even tough. As in this, on preserving the faith, in a homily titled “The Gospel: A Trust Committed to Us”:

The plain and simple reason for our preaching and preserving the faith is because we have been told to do so. It is an act of mere obedience to him who has ‘put us in trust with the Gospel.’ Our one great concern as regards it, is to deliver it over safe … Did men feel this adequately, they would have little heart to indulge in the random speculations which at present are so familiar to their minds.

Or this, in a homily called “Tolerance of Religious Error”:

I wish I saw … this element of zeal and holy sternness spring up among us, to temper and give character to the languid, unmeaning benevolence which we misname Christian love. I have no hope of my country till I see it. Many schools of religion and ethics are to be found among us, and they all profess to magnify, in one shape or other, what they consider the principle of love; but what they lack is a firm maintenance of that characteristic of the Divine Nature … the wrath of God.